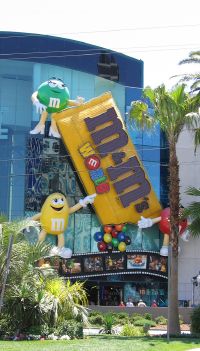 ©2006 A. Bakker Head to M&M's World for a tasty adventure and a break from the casinos and nightlife.

Many locals bemoan the lack of culture in Las Vegas, but there's a bit of something for everyone if you look hard enough. Much of the focus of Las Vegas's museums is on the city's history. Other museums pinpoint local artists. One thing about Vegas: there are a lot of people with financial resources who made this town a viable city, and they tend to offer their time, and open wallets, to rare art works for tourists and locals alike to enjoy.

The Guggenhiem at the Mobil Four-Star Venetian holds works from around the world. The Mobil Four-Star Bellagio has the Gallery of Fine Art that tends to mix it up with works from pop culture, such as Andy Warhol, and classics such as Monet. There's always a bit of the world of art to be seen somewhere in Las Vegas.

Insider's Guide: The Best of Arts & Culture in Las Vegas

Opened in 2001 with mixed reviews, the Guggenheim Hermitage Museum (3355 Las Vegas Blvd) offers an unprecedented opportunity to view some of the world's finest art and special exhibits. The museum, designed by acclaimed architect Rem Koolhaas, houses new exhibits once to twice a year. Note that it draws from the collections of the renowned Solomon R. Guggenheim Museum in New York, the State Hermitage Museum in St. Petersburg, Russia, and the Kunsthistorisches Museum in Vienna.

The Bellagio Gallery of Fine Art (3600 Las Vegas Blvd) will feature 50-plus photographs of American landscapes by renowned photographer Ansel Adams through May 2007. He is most known for his black-and-white photo of the Yosemite Valley in California. The exhibit will include one of Adams's first cameras and the Presidential Medal of Freedom he received from President Jimmy Carter.

Nevada Ballet Theatre (1651 Inner Circle) is a 41-member company consisting of talented dancers from around the world and artists with international performing credits. They perform throughout the year at various venues in Las Vegas.

Located in downtown Las Vegas, Cashman Field Center (850 Las Vegas Blvd North) holds such musicals as Cats and Les Miserables throughout the year. It's mostly known as the home of the Las Vegas 51s, the minor league affiliate of the Los Angeles Dodgers.

New York City may have the Metropolitan Museum of Art, but Las Vegas has the Liberace Museum (1775 E Tropicana Ave). The building is filled with the maestro's flamboyant accessories, from mirror-lined pianos to his rhinestone-covered capes.

With so many old buildings torn down to make way for bigger, better ones, Las Vegas is not the best place to see examples of historic architecture. However, some landmarks remain, many of which are a must-see for tourists. Check out the next section for information on the architecture and landmarks in Las Vegas.