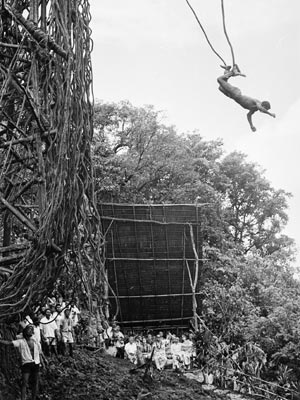 Bungee ­jumping. Enthusiasts say there's nothing like the feeling of plummeting headfirst to the earth, only to be snapped back up at the last second by an elastic cord. But on a small island in the South Pacific, a group of men take part in a ritual that makes the bungee jump look like a leisurely walk in the park.

These men, who live on Pentecost Island in Vanuatu, climb a rickety 98-foot-tall (30-meter) tower, tie vines to their ankles and dive to the ground, falling at speeds around 45 mph (72 kph). When a dive goes correctly, the person gets close enough to touch his shoulders or his head to the earth. Unlike bungee cords, the vines aren't elastic, and the jumpers won't bounce back up. A miscalculation in vine length and a diver may smash into the ground headfirst, resulting in serious injury or death. Vines that are too dry or weak may snap. There are no nets, no helmets and no safety equipment of any kind. The ritual is called land diving, or naghol.

An adventurer named A.J. Hackett witnessed the naghol ritual on Pentecost Island and brought the idea back to his home country of New Zealand. He perfected his first bungee cord around 1986 and performed a famous (and illegal) jump from the Eiffel Tower in 1987 [source: AJ Hackett]. The publicity from this jump brought bungee jumping into the mainstream.

While bungee jumpers have been boinging from bridges all over the globe, land diving in Vanuatu has remained relatively unchanged. The men of Pentacost Island h­aven't infused their vines with elastic or started wearing helmets. They build the same simple towers they've been building for as long as anyone can remember. And, people can and do die during naghol.

­The only real difference these days is that the ritual now attracts crowds of tourists. Queen Elizabeth of Britain visited Vanuatu in 1974 and was a witness when a diver's vine snapped and he plummeted to his death [source: ABC News]. Because of the dangers of land diving, the elders of Pentecost Island refuse to let foreigners participate.

So why do the men of Pentecost Island do this­? According to tradition, the naghol ceremony is a ritual to ensure a bountiful yam harvest. Divers literally bless the soil with their shoulders -- gently, they hope. Today, though, naghol is also a way for young men to step into manhood. Some land divers even admit that they only dive for the excitement or simply to impress a particular girl [source: Istvan]. But is it really worth the risk?

Origins and Experience of Land Diving

Land diving originated from a legendary tale of marital discord. Years ago, a village woman was trying to escape her abusive husband. She fled and climbed up a tall tree. Her husband Tamalie climbed up after her, intending to continue her beating. To his surprise, she jumped from the tree, presumably to her death. He followed her, in either grief or an attempt to catch her. What he didn't know was that she had tied vines to her ankles. So she survived the fall. Tamalie, on the other hand, did not.

The legend gets a little muddy at this point. Some people claim that the village men began practicing land diving in case they ever found themselves in a similar predicament. Barred from performing dives, the women instead gathered at the foot of the tree to watch. They would listen as their husbands, high up on the platforms, made speeches decrying their wives' behavior [source: Soden]. Others state that, in the beginning, the village woman who made the first jump repeated her feat every year. But the men soon took over -- to both prove to her their shame and their courage [source: AJ Hackett]. And, even after the woman died, the ritual remained. At first, the men jumped from trees. But later the ritual evolved and a handcrafted tower was erected instead.

On Pentecost Island, the first yam crop arrives in April. Around this time, the islanders begin building a huge tower with brush and wood from the surrounding jungle. They also select liana vines for the divers. The vines should have plenty of sap inside, which means they're supple and less likely to snap. It takes about five weeks to build the tower, which eventually ends up at a maximum of 98 feet (30 meters) with platforms placed at various heights. Vines secure the tower to the ground.

A trusted tribe elder supervises the entire process, even selecting each jumper's vine. He uses no mechanical calculations to cut the correct length of vine -- he bases his decision solely on years of trial and error. A vine that's cut too long can cause the diver to hit the ground at a high speed, and a vine that's cut too short can cause the diver to slam into the tower and destroy it. Islanders also till the earth below to give it a cushion and help to soften landings.

During the naghol ceremony, the first diver climbs the tower. Elders tie one vine to each foot, and he steps out onto the platform to address the crowd below. The women and men on the ground whoop, dance and clap their hands, cheering on the diver. Usually the diver will address the crowd, speaking what could be his last words. Many divers use this time to get things off their chests and make sure that all their issues are settled. A diver can change his mind at any time without fear of humiliation.

When the brave ones do make their jumps, the crowd goes momentarily silent. In a perfect jump, the diver will cross his arms over his chest. This prevents the arms from being injured or broken upon impact. As he approaches the ground, he will tuck his head in so that his shoulders touch the ground -- ensuring fertility for the next season's yam crop. A not-so-perfect jump can result in a broken neck, concussion or internal injuries. After a jump, the islanders rush to check on the well-being of the diver, cut the vines off his feet and -- depending on how he fared the fall -- send him off into the crowd to celebrate his feat of courage.

What was once a private island ritual is now an industry in Vanuatu. Tourists are welcomed and encouraged by the Vanuatu Tourism Office, and it even organizes tours for­ vacationers to view the ceremony. In the past, naghol occurred only on an annual basis during harvest. However, because the tourism industry is so profitable, land diving now occurs weekly between April and the end of June [source: Vanuatu Tourism Office].

­It's forbidden for foreigners to participate in any aspect of the diving. Spectators can take photos, and several production companies have filmed the ritual for documentary purposes. However, in 2006, the Vanuatu Cultural Centre placed a moratorium on all commercial filming of naghol. The Centre felt that the traditional ceremony was becoming too distorted and commercialized and banned filming in an attempt to protect its culture [source: Vanuatu Cultural Centre].

Tourists generally arrive at Pentecost Island by seaplane. A guide leads them into the jungle, and a short hike brings them to the land diving area. The day the diving occurs is a festive one, with drumming and feasts and general celebration. When the elders declare the tower ready, the men take their places and the rest of the crowd gathers around. Only men may jump, but the women provide emotional support through their dances at the bottom of the tower.

Even though the ceremony is a tourist attraction, tradition remains strong. Although the majority of the islanders today are Christian, they still respect ancient Vanuatu beliefs. Divers sleep below the tower the night before jumping in order to ward off evil spirits. Islanders don traditional garb for naghol. For men, this usually consists of only a penis sheath. Women are traditionally bare-breasted with grass skirts.

In addition to the harvest ritual, land diving is also a rite of passage. As soon as they are circumcised (around the age of seven or eight), boys are allowed to participate. The younger boys typically leap from a lower platform than the more mature men, and work their way up to the top as they grow older. As a boy makes his first dive, his mother holds an item representing his childhood. When he jumps, she throws the item away [source: Istvan].

Divers also refrain from sex the day before they jump -- legend says it will cause the jump to go badly. Also considered bad luck are so-called "good luck" charms. This ironic superstition comes from the belief that the diver who died in front of Queen Elizabeth was wearing a good luck charm at the time [source: Istvan]. The men also settle any disputes or affairs before making a jump in case they don't survive the jump.

How Much Does It Cost To Watch?

If you're interested in watching a land diving ceremony, you must plan with a travel agent or tour. On top of the money it will cost you to get to the South Pacific, you can expect a one- to three-day tour package to start in the ballpark of $395 (43,500 VUV).