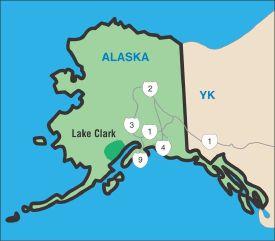 Visitors will find an array of things to see at Alaska's Lake Clark National Park, including coastal rain forests, alpine tundra, active volcanoes, serene fjords, high mountain lakes, and saltwater estuaries. The wildlife is just as diverse. It features beluga whales, Alaskan brown and black bears, river otters, and bald and golden eagles. Most of all, this massive park -- located 150 miles southwest of Anchorage -- offers blissful solitude in the wilderness of Alaska.

Entrance fees: Entrance to the park is free.

Other services: Several small fly-in lodges at the western end of park

Accommodations: The park offers no developed campgrounds. Backcountry camping is available. Private lodging in the park is also available.

Excitement for the trip across Cook Inlet from Anchorage to Lake Clark National Park begins even before visitors board their aircraft for the one-hour flight. On some clear days, smoke can be seen billowing in puffs from one or both of the park's two active volcanoes, named Iliamna and Redoubt. More than 10,000 feet high, the volcanoes are only about 35 miles apart.

More and more white-mantled mountains loom up as your plane approaches the park. Suddenly you are flying through Lake Clark Pass, and before you spreads out what looks like an endless enchanted wilderness: rugged mountains with gleaming blue glaciers flowing down through the valleys between them, winding rivers, waterfalls cascading hundreds of feet to end in multicolored sprays of foam, and the flanks of mountains covered with blazing red and orange fireweed. As you fly out of the pass, the great lake where you will land appears.

Lake Clark is 40 miles long and five miles wide, and its color is a lovely blue. On its southeastern shore, the little community of Port Alsworth is the site of the park's field headquarters and the place where most visitors settle in for a good, long look at some of North America's most outstanding and varied scenery. All of Alaska seems to converge here. Visitors to the park can stay a few days, weeks, or months and enjoy the tremendous solitude of the place. At 4 million acres, Lake Clark is approximately 13 times the size of Grand Teton National Park.

The Newhalen River is famous for its fantastic runs of red salmon, as is the Iliamna River for its rainbow trout. Lake Clark and nearby Lake Iliamna support the world's largest runs of sockeye salmon. If you can visit only one place in Alaska and wish to avoid the crowds of the Kenai Peninsula or Denali National Park, Lake Clark will be the place for you.

The backbone of Lake Clark National Park is the Chigmit Mountains, a range as rugged as mountains can get; they appear to rise directly from great sheets of ice. These peaks are the spectacular meeting place of the Alaska range that dips down from the north and the Aleutian range that rises up from the south.

To the west are Turquoise Lake and Telequana Lake, which are in a wilderness preserve for herds of wandering caribou. The tundra here is similar to Alaska's North Slope. Black bears wander the mountains, along with Dall sheep, at their southernmost limits here. Alaska's state tree, the Sitka spruce, is at its northernmost limit in the park. Throughout the valleys, there are dense conifer forests.

The park has three rivers -- the Mulchatna, Tlikakila, and Chilikadrotna -- that have been officially designated "wild and scenic" by the National Park Service. In this strictly fly-in park with no roads, canoeing or kayaking is the only way to get close to this magnificent wilderness. The park's rivers and lakes also offer some of the finest fishing in the world, with Dolly Varden trout, northern pike, and five kinds of salmon (chum, king, coho, humpback or pink, and sockeye).

Connecting the southwestern end of Lake Clark to Iliamna Lake, the Newhalen River is an excellent place to watch the annual migration of salmon heading upriver to spawn. This river is as clear as fine crystal, making it possible to see the salmon from an airplane. During the spawning season, which begins in late June, the fish arrive at the Alaska coast after traveling thousands of miles through the Pacific. In peak years the migrating salmon color the river red. As many as nine million fish fight their way upstream to Lake Clark and its shallow tributaries where they themselves were spawned.

Everywhere you turn in Lake Clark National Park, you find scenic wilderness just begging to be photographed. Here are some spots to consider:

Lake Clark is a dazzling place to explore. Access to most areas of the park is by water -- either air taxi, boat, or kayak. Taking a kayak out on Lake Clark itself is an open invitation to wander where you will, exploring countless inlets and miles of coastline. The smaller lakes in the park also offer excellent kayaking, while some of the rivers give experienced kayakers or rafters fine white-water experiences.

Surprisingly, the opportunities for organized hiking in this great wilderness park are somewhat limited. The only maintained hiking trail is just 2.5 miles long. Beginning in Port Alsworth on the shore of Lake Clark, the trail leads through a forest of birch and black spruce, around bogs and ponds, and along the shore of the rough-and-tumbling Tanalian River. You will see moose in the ponds, Arctic grayling fish in the river, Dall sheep on the slopes of Tanalian Mountain, and bears practically everywhere.  Elsewhere in the park, there are good but less well marked hikes around the shores of lakes, between lakes, and into the rugged mountains.

Lake Clark National Park has long been a refuge for those seeking solitude, including Dick Proenneke, Alaska's Thoreau. Keep reading to learn more about the history of this secluded park. 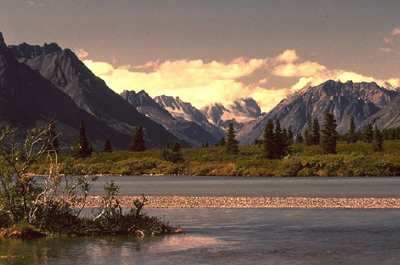 ©2006 National Park Services Dick Proenneke and those who have followed him have enjoyed  the dense forest land that fringes Lake Clark. The terrain provides a habitat for a variety of creatures, including brown bears, wolves, and moose.

The name of Dick Proenneke, a pioneering homesteader, will forever be associated with Lake Clark National Park. Proenneke arrived in 1967, fell in love with the area's rugged wilderness, eventually found some good land, and built a sturdy cabin from hand-felled logs. His Thoreau-like experiment in independent living inspired a memoir, One Man's Wilderness: An Alaskan Odyssey, now considered a classic of Alaskan literature and a must-read for anyone contemplating a visit to this park.

Lake Clark National Park was created in 1980, when Jimmy Carter signed the Alaska National Interest Land Conservation Act. The park was set aside so that it could be maintained as a wilderness area and so that its population of sockeye salmon could be protected.

A trip to Lake Clark National Park gives visitors a chance to celebrate Alaskan wilderness. The park also enables visitors to appreciate exactly what conservation activists are trying to preserve -- not just for our enjoyment, but for future generations as well.