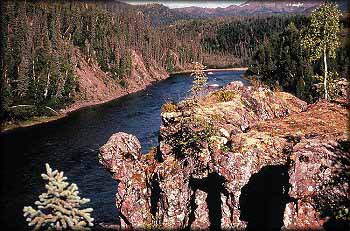 ©2006 National Park Services In the Eskimo language, Kobuk means "great river." Ever since people came to live in this place, the Kobuk has been an important source of food, as well as the main east-west travel route.

The Kobuk Valley National Park region, which sits in a secluded part of northern Alaska, has an intriguing history. In 1961, at Onion Portage, archaeologist J. Louis Giddings found what has been called the most important archaeological site in the Arctic. Giddings uncovered an area that yielded evidence of flint-working technology representing a number of eight different cultures.

Scientists have found chiseled stone spearheads and tools, ancient hearthbeds, Siberian-style pit houses, and other artifacts. Data suggests that native people have been using this game-rich area for at least 12,000 years. The site, now inactive and overgrown, provides important clues about human migration across a land bridge from Asia to North America. In 1980, just as he was leaving office, President Jimmy Carter signed the bill that established this 1.7-million-acre area as Kobuk Valley National Park.

Floating on the river, you will find solitude in the wilderness. Kobuk Valley is one of the least visited national parks. In each of 2004 and 2005, there were fewer than 9,500 visitors to this remote natural realm where Eskimos still hunt the great herds of caribou that migrate through the area each summer.

Although this park receives few visitors, it holds many great sights to reward those adventurous enough to make the trek. Kobuk Valley National Park is a secluded wilderness brimming with natural beauty, abundant wildlife, and archeological treasures.