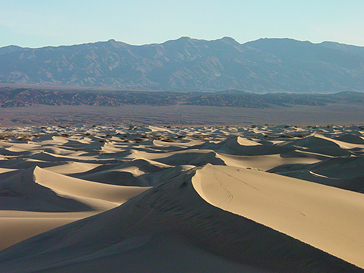 Flowing from its headwaters in the Brooks Range on the east and draining into the Hotham Inlet, the Kobuk River glides across the heart of Kobuk Valley National Park. Its floor is so flat that the river drops only about two or three inches every mile. The river's barely detectable current makes it look like a lake in places where it is especially broad.

A paddle or motor trip on the river usually begins from the little settlement of Ambler on the east side of the park and ends in Kiana, a village outside the park's western boundary.

Placid and pleasant, the Kobuk River flows through land belonging to the Inupiaq Eskimos. In some places, steep banks rise above the water, while elsewhere great boreal forests line both shores, interrupted by lakes and tundra. In late August and early September, you can sit above the river and watch huge herds of caribou swim across the river, the great antlers of the males bobbing and swaying with the motion of the water. In a stream that meanders through a grassy meadow down to a confluence with the river, you may see a grizzly bear fishing for dinner, its enormous paws slashing through the water with lightning speed.

South of a bend in the river on the eastern side of the park, great sand dunes appear suddenly. This is an Arctic Sahara in a strange and unlikely setting. East of the dunes is Onion Portage, the park's best known feature, which is named for the wild chives that grow there. For thousands of years, migrating caribou have splashed across the river here on their way south for the winter. Here, too, evidence indicates that hunters have waited for them.

In the solitude of the Kobuk Valley, visitors can find abundant photo opportunities. Here are just a few ideas:

The Great Kobuk Sand DunesSand is everywhere, shifting and blowing with the wind and the weather. The dunes stretch for 25 square miles south of Alaska's Kobuk River. In this barren landscape, summer temperatures can reach 100 degrees Fahrenheit.

These rolling, active hills, colored yellow and beige, are more than 24,000 years old. Geologists believe they came into existence long before the last ice age, about 10,000 years ago, when the Kobuk Valley was an ice-free refuge with grassy tundra similar to the kind spreading across Siberia today.

The great dunes, along with a smaller tract farther east, were formed by the weathered and wind-blown debris left by an earlier ice age. An unusual combination of geology, topography, and prevailing winds keeps the dunes on the go. Generally inhospitable to vegetation, the dunes of Kobuk Valley are advancing every year through a doomed boreal forest that is in their path. Visitors to the park reach the dunes by boat and can take a short walk through the sand.