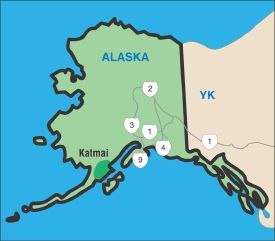 Katmai National Park, on Alaska's southern coast, features extreme volcanic destruction amid rugged wilderness. The park is also famous for its population of brown bears; visitors can watch the bears plucking salmon from the Brooks River all summer long. There is no road access to the park, so visitors must fly in from Anchorage.

Other services: Three lodges, cabins, a wilderness retreat, and a backcountry campground.

On June 6, 1912, following a week of severe earthquakes, the Novarupta Volcano south of Iliamna Lake in southwestern Alaska exploded as if a nuclear missile had struck the area. In what was one of the three most powerful volcanic explosions ever recorded, the entire top of the mountain was violently blown off.

Scientists estimate that the total volume of displaced material was more than seven cubic miles -- two times the amount expelled by the 1883 Krakatoa explosion in Indonesia. A nearby river valley was buried in 700 feet of solid debris. This event is estimated to have had ten times the force of the 1980 eruption of Washington state's Mount St. Helens.

The Valley of Ten Thousand Smokes forms the centerpiece of Katmai National Park, which is also famous for the immense congregations of Alaskan brown bears -- up to 60 at one time -- that gather on the Brooks Falls each summer to feed on sea-run salmon. Visitors fly into the Brooks Camp from Anchorage or Homer, via the bush village of King Salmon, and then view the bears from specially constructed bear observation facilities right on the river.

Streams flowing down from encircling mountains have carved the stark Valley of Ten Thousand Smokes, filled with ash and pumice to depths of hundreds of feet, into deep and spectacular gorges. One sheer-walled canyon, hewed by the serpentine Ukak River, is crowned by cliffs 400 feet high. Although a few plants have been able to gain a tenuous foothold here and there, the valley is essentially lifeless, a moonscape of desolation that looks as if it had recently suffered a terrible catastrophe.

Visitors to Katmai National Park can enjoy just about every outdoor activity imaginable, from hiking and mountain climbing to kayaking and fishing. Keep reading to learn more about the many ways you can spend your time at Katmai.

Highlights: Bears at Brooks Falls and the Valley of Ten Thousand Smokes 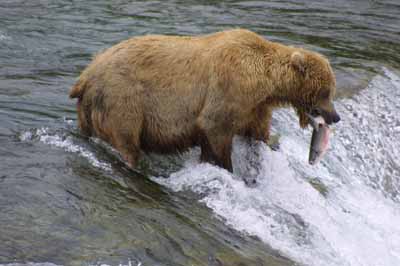 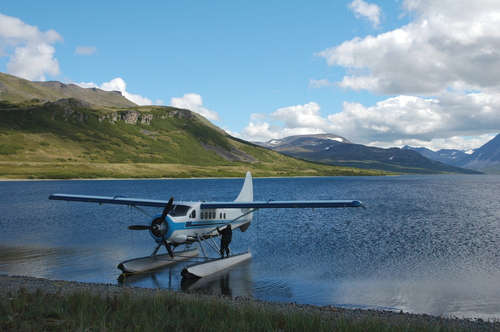