The Kaaba and Al-Haram Mosque

by Jerry Camarillo Dunn, Jr
Next

To Muslims around the world, the most sacred spot on earth is a black-draped, square shrine called the Kaaba, which stands in the central courtyard of the vast Al-Haram Mosque in Makkah. It is toward this spot that Muslims turn five times a day in prayer. And it is the goal of every devout Muslim to make a pilgrimage to the Kaaba at least once in a lifetime.

Islamic tradition asserts that Abraham and Ishmael built the Kaaba as a copy of God's house in heaven. Cube shaped, it is 50 feet high and made of gray stone and marble. Its early history is unclear, but it is known that when Muhammad conquered Makkah in 630, he destroyed pagan idols inside. Since then, Muslims have focused their devotion on the Kaaba. The inside is empty, except for three pillars that hold up the roof and some hanging lamps of silver and gold. 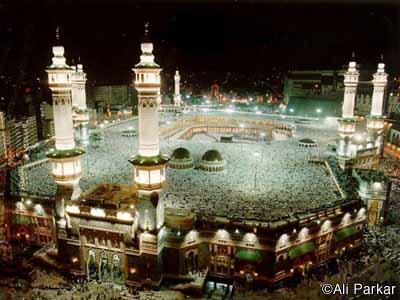 ©Ali Parkar
As many as 300,000 Muslims can fit into the mosque, where they surround the simple cube-shaped Kaaba, the holiest shrine of Islam. Most of the year the cube is draped in a huge cloth of black brocade, the kiswah. See more pictures of famous landmarks.

On arrival, the pilgrim must walk around the Kaaba seven times, asking forgiveness and, if possible, touching and kissing the Black Stone mounted on one of the Kaaba's walls. According to Islamic belief, Adam was given this stone after he was expelled from Paradise, so he could obtain pardon for his sins. The stone was initially white, it is said, but by absorbing the sins of millions of pilgrims, it has turned black. Now cracked into pieces, the Black Stone is protected with a silver frame. Some observers declare that the object is a meteorite, but the devout consider it a stone from heaven.

Makkah's population increases by a million people when Muslims make their hajj to the city during the holy month of pilgrimage. To accommodate the flood of humanity, the Al-Haram Mosque is regularly enlarged and now contains 1.7 million square feet of space. It can hold 300,000 people at one time. As they throng the mosque and circumambulate the Kaaba, people are jammed chest to chest, even in the late hours of night. But their spirits are lifted high.

Jerry Camarillo Dunn, Jr., has worked with the National Geographic Society for more than 20 years, starting as a staff editor, writer, and columnist at Traveler magazine, then writing travel guides. His latest work is National Geographic Traveler: San Francisco. Dunn’s Smithsonian Guide to Historic America: The Rocky Mountain States has sold more than 100,000 copies. His travel pieces appear in newspapers such as the Chicago Tribune and The Boston Globe. Jerry Dunn's stories have won three Lowell Thomas Awards from the Society of American Travel Writers -- the highest honor in the field. He also wrote and hosted a pilot episode for a travel show produced by WGBH, Boston's public television station.