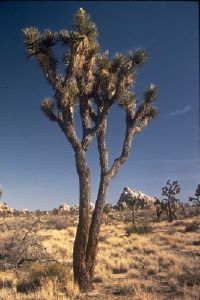 National Parks Image Gallery Although imposing, the Joshua tree is no beauty. "One can scarcely find a term of ugliness that is not apt for this plant," said writer J. Smeaton Chase. See pictures of national parks.
©2006 National Park Services

Even in the challenging climate of the Mojave Desert, Joshua Tree National Park is full of living things. Hardy plants like the Joshua tree itself thrives in the dry environment, and the park's five oases gather comparatively lush greenery. Wildlife also abounds, including coyotes and bighorn sheep. The park, which is an hour's drive from Palm Springs, California, attracts hikers, climbers, wildlife watchers, and landscape photographers.

The Joshua tree, a member of the lily family, is actually an oversized yucca. The "trees" cover the highlands of Joshua Tree National Park, which was designated a national park in 1994 (the area had been a national monument since 1936). Visitors continue to find the park's symbol and namesake to be either grotesque or exquisite.

The first impression is of top-heaviness. At the end of each stout branch are heavy daggerlike leaves. In early spring, after a wet winter, the branch tips visibly droop with heavy blossom clusters. These flowers attract everything from butterflies and birds to legions of landscape photographers and artists.

Joshua trees are superbly adapted to their harsh desert environment. An average of about four inches of precipitation falls annually in this parched country; temperatures soar to more than 110 degrees in summer and dip well below freezing in winter. Strong winds are common in all seasons.

Like other desert plants, the Joshua tree survives these arid conditions by soaking up moisture during infrequent showers and minimizing evaporation during long periods of drought. Once a year, usually after a heavy spring rain, it sends forth a spectacular, if somewhat bizarre-looking, blossom that resembles an artichoke with creamy yellow petals. Other flowering plants come alive, too, putting on a dazzling display of spring color that includes lupine, blazing star, golden coreopsis, Mojave aster, scarlet locoweed, and desert mallow.

The Joshua tree, of course, is only one element in a complex web of life that makes up the park's fragile desert ecosystem. There are at least three distinct ecological zones within the park. The Joshua tree forest is found in the Mojave Desert in the western half of the park. Elevation ranges from about 2,000 to 5,000 feet with a few peaks in the Little San Bernardino Mountains such as Keys View and Eureka Peak exceeding 5,000 feet.

This is also where one finds the jumbled granite formations that have become so popular with rock climbers. Several well-maintained trails lead through boulder fields, canyons, and other geological features in the appropriately named Jumbo Rocks, Wonderland of Rocks, and Hidden Valley areas.

The eastern half of the park is in the Colorado Desert. It is occupied by the low-lying Pinto Basin, surrounded on three sides by the eroded walls of the Eagle, Coxcomb, and Pinto mountains. Vegetation in this region is dominated by the creosote bush and other tough desert plants with occasional patches of spindly ocotillo and spiny cholla cactus. Although hotter and drier than the west side of the park, its plant life is equally, if not more, diverse.

The third ecosystem exists in and around the park's five oases. Shaded by dense stands of fan palms and enlivened by the sound of bird song, the oases are islands of life where green plants flourish and animals such as coyotes and the occasional bighorn sheep come to slake their thirst.

On the next page, we'll discuss the hiking, climbing, and sightseeing possibilities that await visitors to this desert park. 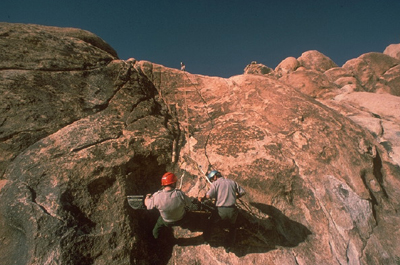 Joshua Tree National Park has become increasingly popular in recent years. Bird-watchers find the area particularly attractive in the spring; rock climbers test themselves among the giant boulderlike formations of quartz monzonite; and hikers enjoy such wonderful trails as the four-mile path to Lost Palms Oasis, where the rare California Fan Palm can be seen. Joshua Tree is one of the most interesting national parks on the West Coast, and certainly one of the best introductions to the quiet splendor of the Mojave Desert.

Joshua Tree National Park has much to offer the nature photographer. Its plant life, unusual geology, and critters present many opportunities to snap the perfect picture. Here are a few ideas:

©2006 National Park Services Photographers interested in vegetation can snap pictures of Teddybear cholla, a plant most commonly found in the eastern half of the park.

Joshua Tree National Park Wildlife Observing desert wildlife can be a challenging endeavor. Many animals are nocturnal, coming out of their hiding places only at night to hunt or gather food. Others tend to be shy, skittering away as soon as you approach.

Birds are perhaps the most commonly seen animals here. In addition to species that reside in the desert year-round, there are a variety of birds that migrate through the park in spring and fall or spend the entire winter.

Less visible are the park's many reptiles. Although small lizards are often seen scooting across the rocks, most reptiles -- including several species of snakes, some poisonous -- are rarely encountered (and many visitors prefer it that way). Occasionally seen is the slow-moving desert tortoise, one of the few threatened or endangered species that reside in the park.

Consider yourself lucky if you spot one of the park's large mammals. Coyotes, perhaps the cleverest critters in the West, are sometimes seen loping across a road or hiking trail. Bighorn sheep keep their distance on the park's rocky slopes. Rarely seen bobcats prowl about in the mornings and evenings. Jackrabbits and a variety of rodents, including ground squirrels, kangaroo rats, and white-footed mice, scamper across the desert floor.

As always, it's wise to shake out boots and sleeping bags in order to remove unwanted guests such as scorpions, which pack a painful, though rarely fatal, sting.

Joshua Tree National Park has a long and interesting history. On the next page, we'll discuss this aspect of the region. 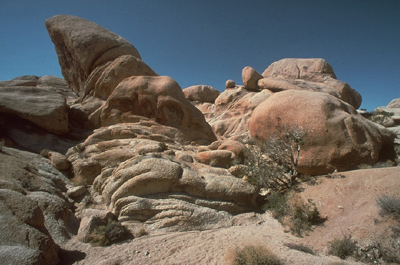 The history of Joshua Tree National Park is, of course, rooted in the Joshua tree itself. When western explorer John C. Fremont encountered a Joshua tree in 1844, he described it as "the most repulsive tree in the vegetable kingdom." An overstatement? Perhaps. But Fremont's words contain a grain of truth. With its shaggy bark, ungainly limbs, and clusters of daggerlike leaves, the Joshua tree is truly an odd-looking plant.

This oversized member of the lily family has also had its share of admirers. After struggling across the Mojave Desert in 1849, William Manly called it a "brave little tree to live in such barren country." And a party of Mormon emigrants passed through in 1851. As the story goes, they took courage from the upraised limbs that seemed to beckon them across the desert just as, in biblical times, Joshua called forth the Israelites: "These green trees are lifting their arms to heaven in supplication. We shall call them Joshua trees!"

The region of the Mojave Desert now known as Joshua Tree National Park attracted a variety of human inhabitants over the years, including the native Serrano and Chemehuevi Indians, who trapped small game in the underbrush and gathered the nutrient-rich seeds of palm trees and mesquite. Meanwhile, a steady stream of prospectors and teamsters used the oases in the region as way stations in their travels across the desert, and ranchers utilized them to graze and water livestock.  As always in the desert, these precious water sources were the hub of both human and animal activity.

The diverse ecosystems and unusual plant and animal life found in Joshua Tree National Park make it well worth visiting. You can enjoy oases, rock formations, wildlife, and stark desert vegetation -- and it's all within an hour's drive of Palm Springs.