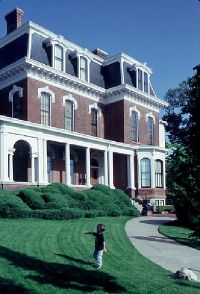 ©2Byways.org This imposing white-trimmed brick mansion in Council Bluffs is a National Historic Landmark. It was built in 1869.

The people native to this land had a great respect for the Loess Hills. The land was greatly honored until the early 1800s; when explorers began to wind their way through this land in the 1700s, it was the end of an old way of life around the Loess Hills.

Historical treasures are located within the Loess Hills from the period of European settlement as well. To see pieces of this history, follow the Lewis and Clark Trail north and south along the hills or prepare for a trip along one of the many trails that traveled to the West.

The Oregon Trail, Mormon Trail, and California Trail all traversed the Loess Hills in their route westward. In fact, the Mormon Trail had a stopover point in the hills called the Great Encampment that was used during the winter months. At this point, permanent settlement in the Loess Hills became an option for pioneers crossing the plains.

The places left behind are protected as designated historic sites. You will find National Historic Landmarks, places on the National Register of Historic Places, and National Historic Trails. Museums and information centers along the byway allow visitors to study the history that surrounds the hills. Buildings such as the General Dodge House and the Woodbury County Courthouse display styles of architecture from another time.

Many sites in the Loess Hills were also used on the Underground Railroad to transport escaped slaves to the north. And you will find monuments to the first explorers, including Sergeant Floyd of the Lewis and Clark expedition, who was the only explorer to die during the journey. Museums cover everything from Civil War history to prehistoric life in this part of Iowa.

Evidence of a nomadic culture of hunters and gatherers was found in Turin (which is on the byway) in the middle of the last century. The site yielded some of the oldest human remains in North America. The bones date back nearly 8,000 years and provide an inside look into life during that time period. In the city of Glenwood, stop at the Mills County Historical Museum to explore a reconstructed earth lodge and artifacts that were discovered in the area.

You may also want to stop at Blood Run National Historic Landmark, where there was once a center of commerce and society for the Oneota Indians. During the period of A.D. 1200 to 1700, these people constructed buildings, homes, and effigy mounds in the area. The collection of resources from Loess Hills is informative to archaeologists and visitors to the byway.

Many of the first European settlers of the Loess Hills of Iowa came from Danish, German, or Swedish cultures that settled in the United States nearly 200 years ago to create a unique heritage. These people learned to live among each other, creating a diverse culture characteristic of the United States.

The byway culture today is a blend of the old and new living side-by-side. Urban centers such as Sioux City and Council Bluffs give way to hidden corners of agricultural hamlets.

From cities to villages, cultural events occur regularly on the byway. While some visitors may choose to attend theatrical events and tour museums, others may want to taste some of the local flavor at a farmer's market, county fair, or heritage celebration.

When travelers come to the Loess Hills Scenic Byway, many of them take part in activities such as the rodeo or apple harvest festivals. To learn more about the people of the Loess Hills, visit the Moorhead Cultural Center, which has displays and activities that tell the story of people and culture on the byway.

Nature may be the star power here, but the Loess Hill Scenic Byway has a wide array of stops for all interests. 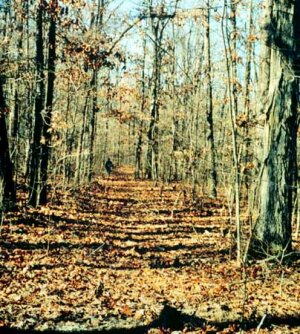