How to Select an African Safari

Browse the article How to Select an African Safari 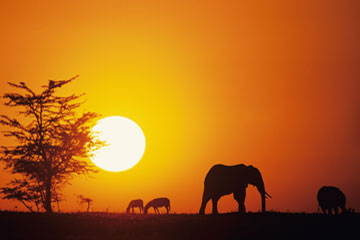 An African safari may be one of the most unique excursions you'll ever take, but you've got to do some research before you start packing. See more safari pictures.
Anup Shah/Getty Images

Picture this: You're about to set off on your big annual vacation with the whole family. Your flights are booked, the kids are out of school, and the suitcases are full of -- khakis and mosquito netting?

For some families, this isn't such a strange situation. Safaris have changed a lot since adventurers first started trekking the African wilds in search of elephant tusks and exotic animal pelts. In fact, with the rise of conservationism and a growing global and cultural consciousness, many modern safaris offer quite the opposite experience. With options for everyone from adventurous individuals to families and honeymooners, safaris are no longer reserved for machete-toting trophy hunters.

Sir Richard Burton, an English explorer who lived during the 1800s, is thought to have brought the word "safari" to the English language. The word is a Swahili term meaning a journey or expedition; it comes from the older Arabic word "safarīya." Today, "safari" can refer to the people who make a journey as well as the expedition itself [source: Collins English Dictionary].

It's believed that safari expeditions began as early as the mid-1800s with the so-called white hunters of Britain and Germany's African colonies. (The term refers to North American and European men who made their living hunting big game on the continent.) The title of first white hunter is still contested among experts today, but many credit the Scottish explorer R.J. Cunninghame as the pioneer of the African safari. After proving his mettle as a renowned hunter and sportsman, Cunninghame served as guide to other would-be explorers -- most notably, U.S. President Theodore Roosevelt and his son Kermit -- during their expeditions.

Although he wasn't a hunter, Carl Georg Schillings also made his mark among the first who explored the plains of Africa: Instead of bringing home furs and carcasses as trophies, he documented his excursions on film using homemade flash powder and an early version of a telephoto lens. His account of his travels, "With Flashlight and Rifle," was widely acclaimed across both Europe and the African colonies [source: Herne]. President Theodore Roosevelt himself also published a book entitled "African Game Trials" that detailed his experiences in what was at the time a vastly unknown territory [source: Kiger].

Ready to start your own exploration, but don't know where to begin? We've got tips on how to narrow down your safari options on the next page.

Select an African Safari: Narrow Down Your Options

Africa's come a long way since the days when its uncharted expanses earned it the moniker of the "Dark Continent," but it still retains the mystery that brought explorers there in the 1800s [source: Brantlinger]. At an expansive 11,686,111 square miles (about 18,806,972 kilometers), it's not hard to see why many modern travelers return to take in as much as possible of what Africa has to offer [source: National Geographic].

Most safari-goers start with either the southern or eastern regions: Southern Africa is home to countries like Zimbabwe and Botswana, and eastern Africa includes countries like Kenya, Tanzania and Uganda. You'll also want to account for weather and migration schedules if you have a vested interest in seeing a certain type of animal [source: Go2Africa].

While safari expeditions used to be reserved for the hardiest of hunters and explorers, some feel that they've become commonplace enough to suffer from their popularity -- enough that National Geographic's Colleen Clark dubbed the majority of modern safari vacations "fly in, bump around in a jeep, photograph the Big Five, have a sundowner, fly home" type operations. However, many safari organizers are beginning to focus on creating more hands-on experiences for tourists. (If you're confused about the Big Five, we discuss that more on the next page.)

One way they're doing that is by weaving ecotourism -- travel that emphasizes cultural and environmental responsibility and conservation -- into the African safari experience [source: The International Ecotourism Society]. This can take almost any form, ranging from assisting wildlife trackers to replacing hunting expeditions with photography trips.

Safari-goers are also focusing increasingly on cultural and interpersonal interactions, and travel organizers are beginning to offer opportunities not just to observe local culture but to actually become a part of it. Tourists are given the chance to meet local tribe members, join cultural rituals such as initiation hunts and just gather for some good local beer [source: Clark].

As you might expect in the case of an international, hands-on vacation, solid research is key. The Internet is a good place start (just make sure you're using reliable and consistent sources), and your local bookstore or library usually has a wide variety of books on all kinds of travel. However, even if you're a hardcore do-it-yourselfer, don't discount the value of advice from a qualified travel agent who's been there and done that (and has some good references). To get you started, we'll explore a few common destinations on the next page.

From ground tents to silk sheets, there are as many different types of safaris available as people who embark upon them. Before you choose your safari, do some research to figure out what best meets your budgetary and sightseeing needs.

Just like the first safaris, animals are still one of Africa's primary draws for would-be adventurers. However, today, it's about observation and appreciation rather than hunting (not least because it's highly illegal in most areas these days). In order to ensure that you see the animals of your choice, here's a quick primer on what you can expect to see where:

As you might expect, the cost of a safari vacation can vary widely depending on the type of excursion you choose. If you want to experience the African landscape at its rawest, choose a safe but low-cost trip, which usually involves making camp nightly in secure areas right on the plains. You'll also find these mobile safaris offered with more comfortable accommodations, using large buses or RVs to provide sleeping and living quarters as your group travels throughout the area. True luxury safaris are also available, and their amenities range from private guest cabins to large swimming pools and gourmet meals. Of course, you'll pay for these extra accommodations.

Take some time to consider when you want to go on safari. Generally speaking, the best time to go is during the dry season, which comprises most of the winter and early spring (May-October). Temperatures are mildest and the foliage thins out a little bit, making your view of the animals you seek that much better. The wet season doesn't have to be a total wash, though: Many countries experience dry spells during that time of year [source: Siyabona Africa].

Ready to start packing? Read on to find out more about what to look for in a safari and why you should always save space in your bag for a pair of flip-flops.

Make Economics Work for You

If you're looking for high-end accommodations but aren't sure you can afford them, consider researching the economic landscape of the countries you're considering. The stronger your home currency is in those countries, the better bang you're likely to get for your buck [source: Harrison]. 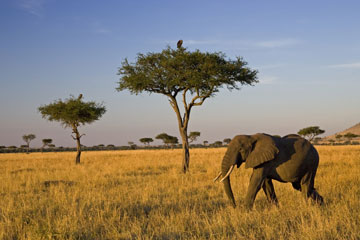 Safaris are wonderful getaways, but the fun will stop in a hurry if you forget your sunscreen!
Darrell Gulin/Getty Images

It'd be a real bummer to get all the way to your destination and realize you forgot something, wouldn't it? Here are some tips from the experts on key items to pack for your safari vacation:

When you're planning your trip, it's also important to be aware of extra expenses. Don't forget to factor in flight costs (usually between $1,000 and $2,000), gratuities and a night in a hotel in an African city before and after your safari to make travel easier. You'll also need a course of anti-malarial treatment; check to see if this is covered under your health insurance.

One key issue you should also take into account is safety. While you should by no means expect to become an evening news story during your trip, here are a few key precautions you'll be glad you took.

Despite a few challenges, for many, an African safari is a truly life-changing experience. Explore our links and lots more information on the next page for great recommendations and tips on your safari vacation.

Before I began my research for this article, I was definitely one of those people who thought that only scientists and really outdoorsy folks went on safaris. I couldn't have been more wrong! From honeymooners to big families, there's definitely a safari out there for all interests and logistical requirements. Also, until now, most of my knowledge of Africa was related to politics and human rights, so I was really excited to learn about the wildlife and how people are getting more involved in conservation and culture. Some of my favorite facts came from a Condé Nast Traveler compilation of experts' recommendations on what to pack -- who knew that flip-flops and chocolate were safari essentials? I hope this article broadens a few horizons just like it broadened mine!