Browse the article How Highlining Works 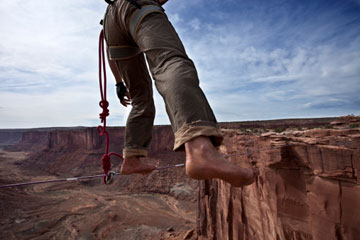 Most highliners wear a safety harness tethered to the rope to prevent them from falling to their deaths if (when) they slip. See more extreme sports pictures.
Jared Alden/Photolibrary/Getty Images

In April 2012, American rock climber Dean Potter garnered international media attention for walking. OK, it was a really scary kind of walking called highlining, an extreme sport in which athletes traverse a narrow, springy band of rope suspended high above the ground.

Measuring less than 1 inch (2.54 centimeters) thick, Potter's line was strung across a 44-yard-wide (40-meter) section of the Enshi Grand Canyon in China's Hubei Province. The 40-year-old looked calm as he stepped out above the chasm, which Chinese state media reported was 1,968 yards (1,800 meters) deep [source: BBC]! While this measurement is likely exaggerated, any fall still would have killed Potter, who chose to walk without a harness or safety net. A couple of times it seemed that the swirling winds might throw Potter from his perch, but after two heart-stopping minutes he safely reached the opposite cliff.

Potter's feat might remind you of tightrope walking, but there are some important differences. Tightrope walkers usually carry a long pole to help maintain their balance and perform on a heavy steel cable pulled tight so that it doesn't move very much. Highliners, on the other hand, balance using their arms and walk on a type of rope known as tubular nylon webbing, which is hollow like a straw and much stretchier than steel cable. This flexibility causes the line to swing and bounce when walked upon, making highlining the more difficult of the two activities.

Even when you wear a safety harness tethered to the rope, highlining can still be quite dangerous. A fall near the starting point could send you swinging back into the rock, while a tumble midline could cause the rope to fail if it's not set up properly. 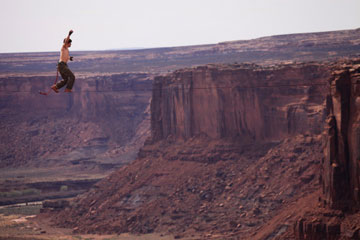 How to Walk the Line: Highlining Techniques 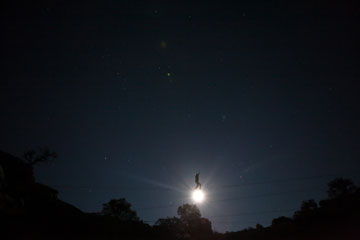 Highlines consist of two main parts: the line and the anchors. The line is usually made from 1-inch-thick (2.54-centimeter) tubular nylon webbing, which is hollow. At each end is an anchor, which can be set up in a number of different ways but often consists of steel bolts drilled directly into the rock. Because of the tremendous forces placed on this equipment, redundancy is crucial. Highliners typically attach a backup line below the main line, and install multiple steel bolts to help anchor each end into the rock. This means that if one line or bolt breaks, another will be there to save you from certain death.

A tether can also help ensure your safety. These consist of a short length of rope tied to a climbing harness on one end and a solid steel ring on the other. Highliners wear the harness and thread the highline through the ring, so in case of a slip they won't fall far. If you do take a tumble, get ready for the ride of your life as your tether jerks you to a stop, then bounces you up and down like a yo-yo for a few moments!

Just as important as proper highline installation is site selection. You might think that setting up a relatively low highline, maybe 15 or 20 feet (4.5 or 6 meters) high, might be a good way to introduce yourself to the sport, but you'd be wrong. Even if your tether is fairly short, a fall might stretch the highline enough to send you careening headfirst into the ground. Location is just as important as height. Only put up a highline where you have permission to do so. Drilling into rocks on public or private land without the proper approval can get you into a lot of trouble and could hurt other people's chances of getting consent in the future.

When it comes to actually walking on the highline, different people have different strategies. Some wear shoes while others go barefoot. Some find focus on the sounds of nature while others wear headphones and listen to music. All make slow, yogalike movements with their arms and legs to maintain balance and safely reach the other side.

Not to be a downer, but highlining is a dangerous sport. Reading this article -- or anything on the Internet, really -- is no substitute for one-on-one training from someone who knows what they're doing. If you want to get into highlining, get on a slacklining blog and find a mentor in your area who can teach how to do it safely.

If you're going to risk life and limb walking a highline, why not make a vacation of it? The sport's athletes have set up lines in some of the world's most beautiful places and accomplished some pretty amazing feats while they were at it. With a little practice, you could travel to some of these spots as well and walk some of the planet's most notorious highlines.

Because rock climbers pioneered highlining, many of the sport's premier destinations are also popular climbing spots. This is the case with the canyons around Moab, Utah, which boast numerous established highlining routes. Here, notable slackliner Andy Lewis completed the longest ever "free solo" highline, meaning that he didn't use any type of tether to protect him from a fall. The route, known as "The Great Bongzilla," was an incredible 177 feet (54 meters) long and 200 feet (61 meters) high [source: Five Ten]. Moab is also where Dean Potter walked out on a 900-foot (274-meter) high highline at Hell Roaring Canyon, lept off, and parachuted to the riverbed below [source: Longman].

Of course, highlining is still alive and well in California, the sport's birthplace. Joshua Tree National Park, west of Los Angeles, is home to a rugged pile of desert boulders known as "Hall of Horrors" where a typical highline is 70 feet (21 meters) long and 200 feet (61 meters) high [source: Sahagun]. The world's best highliners also flock to Yosemite National Park where the Lost Arrow Spire remains a coveted route almost three decades after Scott Balcom first traversed it in 1985.

Although highlining started in the United States, it isn't limited to that country. Athletes from all over the world have set routes in places as varied as France, Spain, South Africa, Brazil and New Zealand. In fact, the highest line ever walked was located in Kjerag Lysefjorden, Norway. There, Christian Schou traversed a highline measuring 39 feet (12 meters) long and 3,280 feet (1,000 meters) above the ground on Aug. 3, 2006 [source: Guinness].

So, whether you think highliners are brave or just crazy, you have to admit that what they do is pretty amazing. And who knows, maybe you'll find yourself battling fear and wind gusts on your own highline someday!

Slacklining got some major media exposure in 2012 when Andy Lewis performed with Madonna during the Super Bowl XLVI halftime show [source: Longman].