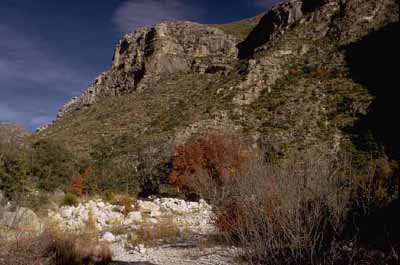 Guadalupe Mountains National Park encompasses a diverse array of landscapes, from the stark Chihuahuan Desert to lush coniferous forests. Located in western Texas, about 85 miles east of El Paso, the park offers numerous scenic hiking trails that let you get up close and personal with the natural beauty of this ancient coral reef.

The dry flatlands of the Chihuahuan Desert -- a vast, barren stretch of cactus and greasewood that extends for hundreds of miles across West Texas and south into Mexico -- seem an unlikely place to find an ocean reef. But here, hundreds of miles from the nearest saltwater, an immense escarpment of orange and red limestone that was once on the bottom of a sea glistens in the bright sunlight.

The Guadalupe Mountains, a V-shaped range with its northern arm extending into New Mexico and its southern arm pointing toward Mexico, rise more than a mile above the desert. Visible for nearly 50 miles, a great monolithic rock called El Capitan, which in Spanish means "the chief," rises audaciously at the point of the V. For centuries it has been a landmark for travelers crossing this vast desert.

Guadalupe Mountains National Park encompasses the four highest points in Texas (up to 8,749 feet) and is located in the extreme western point of the Lone Star State, near the historic border town of El Paso. This park is a national park of extremes, from the Chihuahuan Desert at lower elevations, which includes such plant species as New Mexico agave and prickly pear cactus, to the thick forests of ponderosa pine, limber pine, and Douglas fir that darkly cover the higher peaks. 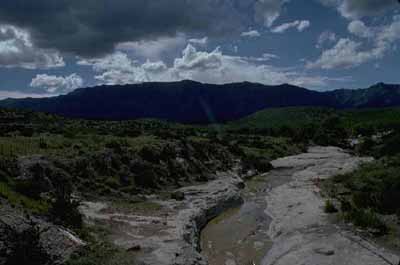 Guadalupe Mountains National Park includes more than 80 miles of rugged and scenic trails that wind in and out of canyons, ascend rocky crags, and wander through quiet forests, where hummingbirds dart by and mule deer graze. Some side canyons within the park shelter exceptional fragments of original ecosystems, as well as exposed sections of the formidable Capitan Reef and its associated rock segments.

The park is also well known for its mountain and desert bird life. It was to the Guadalupe Mountains that landscape photographer Ansel Adams came in the summer of 1947. While in the park, he made his celebrated image of majestic El Capitan (Spanish for "The Chief"), which rises to 8,085 feet in a squarelike mass from the desert floor. The Guadalupe Mountains today are much as Adams found them half a century ago -- a little-visited desert mountain range that is pure inspiration at certain times of the day and year.

The Guadalupe Mountains offer countless views and vistas for that perfect photo. Here are some ideas:

The canyons hold forested glens of deciduous trees and alligator juniper alongside meadows of hip-high grasses and creosote plants. In Dog Canyon, among stands of Gambel oak, Douglas fir, and limber pine, you can still see Apache mescal-roasting pits.

Five miles long and thousands of feet deep, McKittrick Canyon contains an array of life and geological history unique to our planet. Amid forests of oak, juniper, maple, and the lovely Texas madrone with its oddly twisted red bark, you can find the remnants of the floor of a sea that covered the area more than 200 million years ago. Above you, inlaid in the canyon walls, are millions of years of geological history told by layers of ancient fossils and startling rock formations.

Now that you've gotten a taste of the sights you'll see when you visit the Guadalupe Mountains National Park, let's learn a little about the park's history. On the next page, we'll talk about the geologic processes that created this natural wonder, and we'll take a look early human habitation of the area.

History: How the Guadalupe Mountains Were Formed 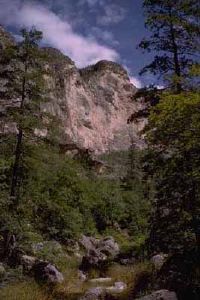 ©2006 National Park Services The Guadalupe Mountains are one of the world's biggest coral reefs, dating from a time when a large part of Texas was a vast saltwater basin.

The Guadalupe Mountains are stunning to view, which begs the question: How were they formed? At more than a mile and a half above sea level, El Capitan (8,085 feet) and adjacent Guadalupe Peak (8,749 feet) are the two tallest mountains in Texas. The peaks are the most obvious sections of the Capitan Reef, most of which still lies buried thousands of feet below the desert's surface.

More than 250 million years ago, the immense reef enclosed about 10,000 square miles of a shallow inland sea. The reef was formed as the remains of lime-secreting algae and other primitive creatures that lived in the sea washed ashore. Gradually the climate of the region changed, and the sea dried up, leaving much of the reef exposed.

More millennia passed, and the seabed and the reef were buried beneath a vast plain, where they remained for millions of years. Then, about 12 million years ago, geologic processes deep beneath the earth raised and tilted the ancient seabed and reef, leaving the 40-mile section now known as the Guadalupe Mountains high and dry. In the process, the reef was fractured in several places.

Over more millions of years, wind and water worked to turn these deep cracks into lovely canyons that slice into the mountains we see today. These chasms, including McKittrick Canyon, Dog Canyon, and many others, are the heart of Guadalupe Mountains National Park.

History of the Guadalupe Mountains:

Archaeological remnants, such as spear tips, knife blades, bits of basket work, and pottery shards, attest to a human presence in the Guadalupe Mountains that goes back about 12,000 years. When people first came to the area, during the decline of the last Pleistocene ice age, the climate was wet and humid. The first people who lived here probably foraged for food and hunted such animals as camels and mammoths.

By the time Spanish explorers appeared (around 1550), wandering Mescalero Apaches often made their camps at springs near the base of the range.

Apache and Spanish legends about great treasures of gold and silver hidden in the mountains eventually drew American prospectors to this desert. In the years after the Civil War, they were followed by farmers, ranchers, and the U.S. Cavalry.

In the Guadalupe Mountains, the Mescalero Apaches made their last stand, but by 1890 virtually every Apache had been killed or forced onto a reservation. Initially the territory was taken over by private ranching and mining interests. Over time, enough land was donated to create a park, which is still being expanded as more land becomes available to the Park Service.

The natural beauty that inspired Ansel Adams still greets visitors to the Guadalupe Mountains National Park, with its scenic vistas, challenging hiking trails, and diverse ecosystems that are millions of years in the making.