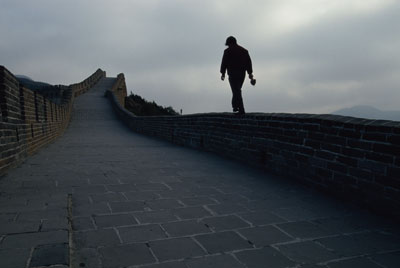 Organizations have taken on the responsibility of preserving the wall, but it's not yet out of the danger zone. It will take time before everyone recognizes the national importance of this landmark.
Tom Stoddart/Getty Images

Until recently, the Chinese government was reticent to discourage or limit tourist access to the Great Wall for fear that it would decrease revenue to the area. However, as it has become increasingly clear that the wall is in peril, the government, with input from organizations such as the International Friends of the Great Wall and the Great Wall Society of China, has put laws and regulations in place to stop damage to and properly restore the structure. In fact, the World Monuments Fund added the Great Wall to its list of the World's 100 Most Endangered Sites.

In 2003, the Beijing Administrative Bureau of Cultural Relics enacted regulations to protect the Beijing portion of the wall, which shoulders some five to six million tourists each year [source: People's Daily Online]. The regulation allows the organization the authority to prohibit the construction of any building within 1,640 feet (500 meters) of the wall that can cause either unpleasant aesthetic damage or physical desecration. Seemingly innocent activities that have an adverse effect on the wall have been declared taboo. These activities include pitching a tent, gathering firewood, herding animals and setting up stands to charge admission to less savvy tourists.

Soon after the Beijing regulations were put in place, the Chinese government enacted the first national law aimed at protecting the Great Wall. The government officially prohibited activities like removing bricks or stones from the wall, holding raves or parties on top of it, carving words into the wall or building a home too close to it. Raves and driving and carving on the wall have become such big problems in recent years that in 2006, the government instituted fines of up to $62,500 for institutions and $6,250 for individual violators. In addition to enacting laws designed to protect the Great Wall from further damage, the Chinese government has also allocated funds to allow for continued preservation and restoration of the monument. Advocates encourage individuals to contribute to these efforts in several ways, such as by planting trees, removing litter and making sure to never take anything from the wall or leave anything behind.

Thanks to these efforts, awareness about the Great Wall's status as a historical landmark of intrinsic value and beauty to China and the world has become more established, effectively beginning to turn the tide of centuries of neglect and abuse. Unfortunately, in many of the less metropolitan areas where the wall is located, locals don't understand the cultural significance of the structure. In fact, they continue to routinely use bricks for building purposes. Several men in Inner Mongolia were even accused for removing what they deemed to be a pile of earth from a particularly ancient portion of the wall to use as a landfill. Simply put, many people who are just trying to survive aren't as concerned with a landmark as they are with taking care of their families.

Although it may continue to be an uphill battle for some time, the Great Wall's preservation has been embraced as a matter of the utmost cultural and historical importance, especially because it serves as a gateway into China's storied and colorful history.