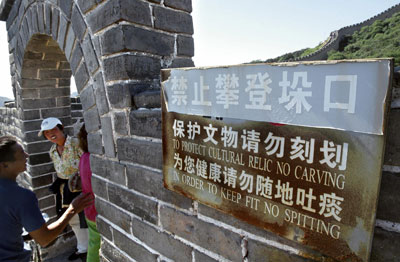 Graffiti stains this archway of the Great Wall of China, despite the nearby sign that forbids desecration of the wall.
FREDERIC J. BROWN/AFP/Getty Images

The Great Wall isn't just one of the world's most famous landmarks, it's also the only historical monument marked on world maps by cartographers. Understandably, the Great Wall is a magnet for tourism. In fact, more than 10 million people visit it each year [source: BBC News]. While its status as a bona fide tourist attraction results in valuable revenue, tourism and other factors have taken a massive toll on the wall's structural and aesthetic integrity.

First, it's important to note that the Great Wall hasn't exactly been in top-notch condition for some time. Following the Manchu invasion in the 1700s, it was largely abandoned as a military priority. After all, why would the Manchu waste time and energy on something that failed to keep them out? As a result, the wall became overgrown by vegetation and began to deteriorate as a result of earthquakes and exposure to snow, wind and rain. Battles ranging from tiffs with the Huns to high power assaults with Japan in the 1930s and '40s also hastened the wall's decline.

Even local residents' everyday activities have contributed substantially to the Great Wall of China's corrosion. Herding animals and gathering firewood have sped up the deterioration process after years of abuse -- stomping livestock and human tools have chipped away at its edifice. What's more, Mao Zedong holds some responsibility for the damage: He encouraged the Chinese people to use bricks and other parts of the wall to build homes and other structures as recently as the 1950s. Road construction crews have even dared to knock holes in portions of the wall to build highways.

Ironically, the tourism industry is one of the largest contributing factors to the wall's demise. For years, tourists have taken pieces and bricks from the wall as souvenirs. They've etched names and epithets into the wall, and vendors have set up shop with souvenir stores, cable cars, parking lots, fast food restaurants and more within feet of the landmark. Unsightly advertisements, signs and public utilities have shown up in high-traffic areas along the wall, and litter and graffiti have marred it and surrounding areas. Well-meaning tourists and locals have taken it upon themselves to restore portions of the wall in unauthentic and unreliable ways. As a result of all of these factors, a whopping 50 percent of the Great Wall has disappeared entirely, with a remaining 30 percent in ruins and a mere 20 percent classified as being in "reasonable" condition [source: Mooney].

Next, we'll learn about some initiatives to restore the Great Wall.

The Great Wall was recognized and immortalized in 2007 as one of the modern-day seven wonders of the world. The worldwide contest was implemented by the New7Wonders Foundation, an organization dedicated to increasing awareness about the world's natural and man-made structures. More than 100 million votes were cast worldwide via telephone and the Internet. The contest results weren't endorsed or publicized by Chinese heritage officials, despite the results' likely impact on tourism. Other inductees to the illustrious new list were the Colosseum (Rome), Taj Mahal (India), Statue of Christ Redeemer (Brazil), Chichén Itzá pyramid (Mexico), Machu Picchu (Peru) and Petra (Jordan). The original seven wonders are thought to have been designated by a Greek author in ancient times.