The Great Wall under the Ming Dynasty 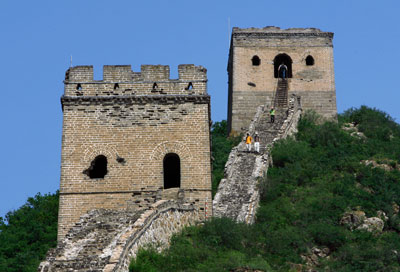 Tourists at Simatai climb a portion of the wall built during the Ming Dynasty. This section of the wall was built as one of four major strategic strongholds for defensive purposes.
TEH ENG KOON/AFP/Getty Images

It wasn't until the rise of the Ming Dynasty in 1368 that the Great Wall of China as we know it today was brought to fruition. The Ming Dynasty had to contend with a great number of attacks by minority tribes, so it made substantial additions to the wall.

The complexity and sheer size of the Ming wall outdid all of its predecessors. Not only did the dynasty add length, it also added double and triple walls in some places to reinforce previously built structures and confuse attackers. In fact, in many places the wall is wide enough on top for someone to drive a car on it, averaging an impressive 22 feet (6.7 meters). Although the wall sports an impressive girth, it's not visible from outer space as the old myth claims. If that were true, major highways would also be visible -- many are much larger than the Great Wall.

The Ming Dynasty also increased the military prowess around the wall. Fortresses were placed intermittently along the length of the wall to store military supplies, and beacons were built to provide much-needed light. Another innovation to the wall that the Ming Dynasty introduced was guards. Guard towers were erected at strategic points along the wall from which guards would send out smoke signals and fire cannons to notify each other of possible hostile attacks. The only major downfall to these guard towers is that they were manned by humans, who sometimes fell prey to enemies' bribes and allowed them access to the other side of the wall.

Construction on the Great Wall was an ongoing and successful effort under the Ming Dynasty until the 17th century when China could no longer thwart the efforts of the Manchu, invaders from Manchuria who successfully infiltrated China. This takeover, which brought down the Ming Dynasty and gave rise to the Qing Dynasty, effectively halted the Great Wall's development, which spanned more than a whopping 2,000 years.

In the next section, we'll take a look at how the wall fell into disrepair.

Legends of the Great Wall

As with most ancient monuments, legends abound about the Great Wall of China. One of the most famous and well-known legends tells the story of a woman named Meng Jiangnu, whose husband forcibly was sent to build part of the Great Wall during the Qin Dynasty (221-206 B.C.). After some time apart with no word from her beloved, she set out to find him, discovering too late that he had died. Legend has it that her loud, bitter weeping caused part of the Great Wall to collapse. Although this legend may not be true, it certainly speaks to the fact that many thousands of lives were lost during the Great Wall's 2,000 years of construction.