The Rise of the Great Wall 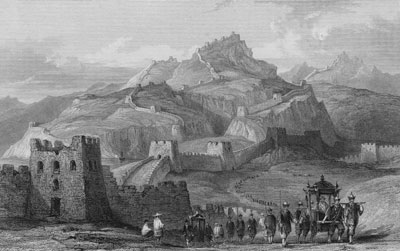 This engraving of the Great Wall of China shows some of the treacherous terrain that the barrier winds across.
Mansell/Mansell/Time & Life Pictures/Getty Images

When the first portions of what would eventually become the Great Wall were built, they weren't part of a large master plan to block off China from the north. Instead, beginning anywhere from the seventh century B.C. to the fifth century B.C. (the start date is disputed by archaeologists), many small walls were erected by the six different states that would eventually become China as we know it. The point of the walls was to provide protection from the often warring states as well as a variety of invaders, including the Huns.

In 220 B.C., the Qin Dynasty unified the Qin state with the six other warring states (Han, Wei, Chu, Yan, Zhao and Qi, in that order). The emperor Qin Shihuang then ordered the separate pieces of the Great Wall in the northern states to be connected. He did this to provide maximum security from the troublesome Huns. Thus, the Great Wall began to take shape in its most infantile form.

Construction on the wall, which is made out of several different materials including bricks, stone, grass, rock and earth, continued over subsequent centuries and was completed by Chinese soldiers, criminals and commoners. This imposing structure didn't come without a price, however. It's estimated that thousands upon thousands of Chinese workers died building the Great Wall, and many of them were buried inside the structure itself.

In addition to the Qin Dynasty, other dynasties were involved in the Great Wall's long and complex construction history.

Under the Ming Dynasty, the wall underwent its biggest transformation. Next, we'll look at the reinforcements this dynasty added.

Why were the Huns so feared?

The Huns probably weren't the kind of people who were invited over for tea very often. Clearly, they were a fearsome bunch, given that the Chinese saw fit to erect early portions of the­ Great Wall in order to prevent them from invading. Considered barbarians by many, the Huns (known by the Chinese as the Hsiung-nu) terrorized Asia and Europe. Under the leadership of the notorious Attila the Hun, the Huns wreaked havoc on the Roman Empire during the fourth and fifth centuries. Historians believe the Huns were originally a nomadic group from Asia, and accounts describe them as being fierce and skilled military geniuses and remarkable horsemen. The Hun reign of terror faded quickly following Attila's death in 454, when much of the remaining army disbanded and joined other forces.