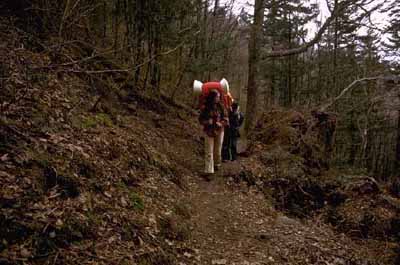 ©2006 National Park Services Great Smoky Mountains National Park, with more than 900 miles of trails, attracts hikers from all over the world.

Great Smoky Mountains National Park is truly a vestige of an age lost in the mists of time. It supports an abundance of wildlife, including white-tailed deer, black bear, opossum, and an amazing diversity of bird life. At the higher altitudes, hikers can hear the pervasive drumming of ruffed grouse and the characteristic thumping of the woodpecker. Down lower, the songs of vireo and warbler fill the air. In all, more than 200 bird species inhabit the park.

Part of the Appalachian system, the Great Smokies are remarkable for their wild and luxuriant vegetation. More than 100 species of trees and more than 1,300 kinds of flowering plants grow here. The incredible tangle of trees and brush throughout the park is responsible for the "smoke" that gives the mountains their name. Water and hydrocarbons are exuded in great profusion by the close-packed array of air-breathing leaves, producing the filmy haze that never leaves this place during warm weather.

The park, which covers 800 square miles in the heart of these mountains, has so many types of eastern forest vegetation that it has been designated an International Biosphere Reserve. About half of this large lush forest is virgin growth that dates back to well before Colonial times.

Although this is our most popular national park -- it normally sees more than twice as many visitors as runner-up Grand Canyon -- it is not necessarily the most crowded. More 900 miles of trails provide good backcountry access.

A good start in terms of getting off the beaten path, the Appalachian Trail, the world's longest continuous walking route, almost perfectly bisects the park from southwest to northeast. The trail passes through 14 states, from Springer Mountain in Georgia to Mount Katahdin in Maine, along its 2,174-mile route. Hiking and trail clubs maintain shelters and campsites along the path, which was designated a national scenic trail in 1968.

The trail enters Great Smoky Mountains National Park from the south through the Cheoah Mountains and the Nantahala National Forest. Most of the 70 miles of the trail, which almost perfectly bisects the park from southwest to northeast, passes through virgin wilderness well away from highways or other trails.

From the southwest, the trail crosses near the 5,530-foot summit of Thunderhead Mountain and then follows the Tennessee-North Carolina border through a thick spruce and fir forest to the fire lookout tower on top of 6,643-foot Clingmans Dome, the park's highest point. From the tower, depending on the weather, hikers get either a stupendous panoramic view of range upon range of mountains or a swirl of churning clouds.

After the trail crosses a park highway at Newfound Gap, hikers can take a side trip through towering 200-year-old eastern hemlocks to Alum Cave Bluffs, the site of a nineteenth-century commercial alum mine and a reputed source of saltpeter for Civil War gunpowder. After passing near the summit of 6,621-foot Mount Guyot, the trail leaves the park near the Big Creek Campground and enters Cherokee National Forest.

Whether you're hoping to capture photos of deer, mountains, or historical log cabins, you'll have ample opportunity at Great Smoky Mountains National Park. Here are some ideas:

©2006 National Park ServicesAt Catalooche, you just might be able to focus your lens on a black bear.

The inviting scenery of Great Smoky Mountains National Park attracts hikers and campers in droves. On the next page, learn how these mountains came to be and who once inhabited them.