History: How the Great Sand Dunes Were Formed 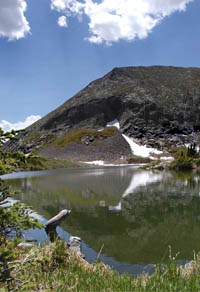 The magnificent sand dunes are, of course, the main attraction at Great Sand Dunes National Park. Scientists believe that the sand that comprises the dunes has been in the San Luis Valley for 35 million years. According to their theory, volcanoes erupted where the San Juan Mountains now stand, spewing ash-flow tuff and sediment into the valley.

Subsequently, the Sangre de Cristos uplift occurred beneath the valley floor, and sediment filled in the widening Rio Grande rift. The resultant substratum of rock under ash-flow tuff under sediment gave rise to the sand dunes we see today.

The dunes are shaped by winds blowing across the landscape. These winds slowly shift the face of the dunes and add new sands that have been deposited by the Medano and Sand creeks. Varying wind patterns create an array of dune designs:

It is fascinating to seek out each type of dune and try to imagine the forces that created it. The far northeast corner of the dunefield is known for its complex of star dunes, and parabolic dunes are commonly formed in the sand sheet southwest of the main dunefield. Barchans may be seen directly across from the dune's main parking lot, and along the southern boundary of the dunefield a series of transverse dunes can be observed.

Surge FlowAnother fascinating natural feature that visitors can observe is the pulsating flow of the Medano and Sand creeks. The creeks' surge flow is unique, and this is the only location in North America where the three elements necessary to create the rhythmic waves are present: sufficient water to produce surges, a steep enough grade to give a stream a higher velocity, and a smooth and mobile surface that has little resistance.

The actual pulse is caused when a dam breaks, releasing a wave of water. As water flows across the sand, sand dams, or antidunes, form beneath the surface of the water. The antidune is slowly built up as more sand collects on it, and the volume of water dammed behind the antidune increases accordingly. Eventually, the trapped water becomes heavy enough to break through the antidam, and the creek experiences a surge, or pulse.