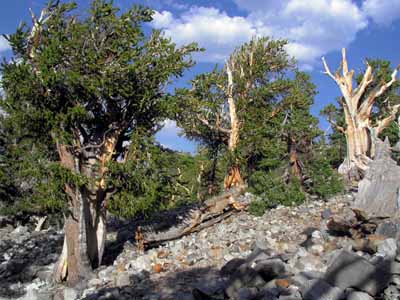 ©2006 National Park Services At the limit of the timberline, 4,000-year-old bristlecone pines survive in an incredibly hostile climate of harsh winters and lengthy annual droughts.

Great Basin National Park was named by John C. Fremont, who led the first party of white explorers into this territory in the mid-19th century. Although maps make it look like a basin, the region actually consists of more than 100 valleys. One of the newest national parks within the 50 states -- it was established in 1986 -- Great Basin takes in only a small part of this vast expanse of land, which includes some of the nation's most geologically fascinating terrain as well as some fascinating plant life. Here are the highlights:

Among their many treasures, Lehman Caves contain excellent examples of cave shields. These large and somewhat rare disks grow out of ceiling cracks where seeping mineral-laden water deposits sediments in flat circular shapes. The shields grow at odd angles from the ceiling, floor and walls, and may be decorated with popcorn or helictites along a central crack.

The bristlecone pines look ancient indeed with their twisted, gnarled trunks and their bark carved and polished like rock by eons of wind, snow, and ice. The trees are vestiges of a Pleistocene forest that once covered the region.

Bristlecones are survivors; they continue to live even after most of their trunks and branches die, sustained by minuscule amounts of moisture. Scientists estimate that some of the bristlecone pines in the range are more than 4,000 years old.

Prior to the establishment of the park, one tree named Prometheus lived for 4,844 years, according to its annual growth rings, before it was cut down in 1964. That tree began its life a long time ago -- before Sargon of Akkad, Hammurabi, Ramses, Moses, or any other well-known individuals from early human history. Touch one of those primeval trees, and you are touching something exceedingly ancient from a human perspective.

Great Basin National Park offers visitors plenty of solitude, as well as sweeping views of the basin and range country that sit within and outside its boundaries. As numerous visitors find out each year, there are many wonders to behold in this desert-surrounded park.