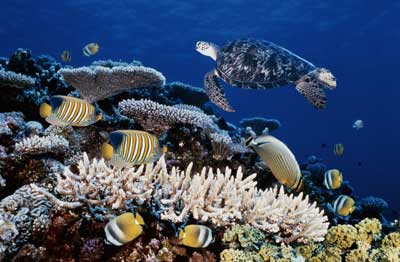 Early explorers saw the Great ­Barrier Reef not as a natural wonder of the world, but as a labyrinth. The collection of more than 3,000 reefs and 600 islands along the northeast coast of Australia caused many shipwrecks before it was mapped in th­e 1800s [source: Australian Government].

The first recorded "discovery" of the reef occurred when Lieutenant James Cook crashed into it in 1770 [source: Zell]. Although Cook's quick-thinking crew was able to repair the ship and sail on, the reef has caused many shipwrecks, which continue to be popular dive sites for the millions of tourists who explore the reef's waters every year.

This underwater Eden hosts much more than an abundance of coral. You'll find a greater diversity of life on a single coral wall than you will on an entire continent [source: Chadwick]. So far, 1,500 species of fish have been spotted on the reef, and new ones are found every year [source: Chadwick].

Although some sections of the Great Barrier Reef may be 2 million years old, most scientists agree that the majority of it is a mere 500,000 years old. That's young by coral reef standards. Since then, its growth has been interrupted several times by sea-level changes that occurred during the ice ages. The structure of the current reef is approximately 6,000 to 8,000 years old, and is growing on top of older reefs that formed during a period of higher sea levels [source: CRC].

In this article, you'll learn about the different islands and reef types that make up the Great Barrier Reef. Who lives there? What threats face it? And how does Australia oversee every square mile of it?­

On the next page, you'll find out about the islands and reefs comprising this marine wonderland. 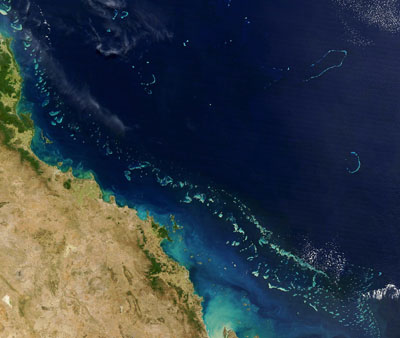 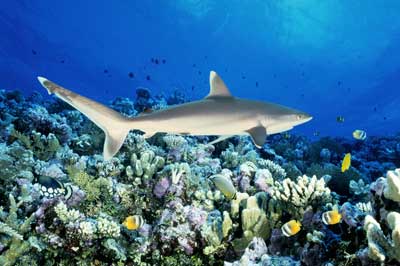 Coral reefs host vast amounts of life, including silvertip sharks like this one.
Jeff Hunter/Getty Images

The tropical location of the Great Barrier Reef is ideal for more than just the 2 million tourists who visit each year [source: Australian Government]. The sun and the shallow, clear, warm waters are perfect for coral growth. And where there's an abundance of healthy coral, you can bet there's a lot of other marine life as well. Reefs host more animal species than any other marine ecosystem [source: Microsoft Encarta].

Along with the 1,500 species of fish mentioned earlier, the reef also hosts more than 200 species of birds, 4,000 types of mollusks, 30 species of whales and dolphins, and six species of sea turtles [source: Australian Government, Microsoft Encarta] On just one chunk of coral, researchers found 1,441 sea worms from 103 different species, and 250 types of shrimp on a single reef [source: Chadwick].

The Great Barrier Reef is one of the few places where you might see a dwarf goby fish smaller than your fingernail, a whale shark bigger than your car and an overstuffed giant grouper on just one dive. The "non-fish" species are equally as stunning. Giant clams, whose rainbow-colored mantles are as unique as fingerprints, can reach up to 4 feet (1.2 meters) in length and weigh more than 440 pounds (200 kilograms) [source: National Geographic].

While you'll want to give all animals in the Great Barrier Reef some space, you may want to cut a wider berth around some, like the 20 species of sea snakes, some of which possess venom 20 times stronger than the most poisonous land snake [source: Zell]. Another critter you have to watch out for is the miniscule blue-ringed octopus. At a mere five to 20 centimeters, this poisonous mollusk has surprised greedy divers who try to sneak shells into their wetsuits only to be bitten by the venomous octopus lurking inside [source: Zell]. Coral, too, can pack a serious punch. Just barely brushing up against the stinging fire coral will leave you with a burning itch.

Another marine creature is deadly not to people but to the reef itself. The crown-of-thorns starfish, which feeds on coral, has devastated the reef on two separate occasions since the early 1960s. During an outbreak, thousands of these starfish descend on the reefs and feast on the fragile polyps, leaving a path of destruction in their wake. Algae often colonize the resulting coral graveyard, preventing the coral from swiftly recovering.

Reefs hit by the crown of thorns, one of the largest starfish in the ocean, can take more than 10 years to regenerate [source: Sammon]. Scientists are still trying to pinpoint what causes the sudden explosions of the sea stars, suggesting it could be anything from runoff to overfishing [source: Sammon].

Damage caused by starfish notwithstanding, the Great Barrier Reef has fared relatively well in comparison to other coral reefs; its reefs are ranked among the world's least threatened [source: Microsoft Encarta]. You'll find out how the reef has managed to stay out of danger on the next page.

Starfish Sabotage and Other Threats

As destructive as the starfish are to the Great Barrier Reef, humans may have them beat. In 2006, scientists reported that nesting loggerhead populations had decreased by 50 percent to 80 percent, and the dugong -- a relative of the manatee -- was only at 3 percent of its 1960s levels [source: Australian Government]. Overfishing, freshwater runoff and global warming are just a few things that hurt coral reefs. You can read more about the threats facing these fragile ecosystems in "How Coral Reefs Work." 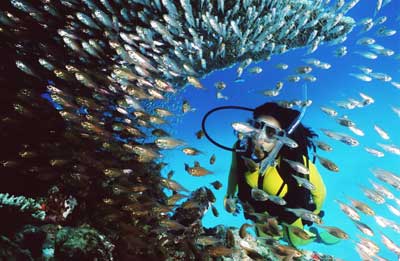