History: How the Tetons Were Formed 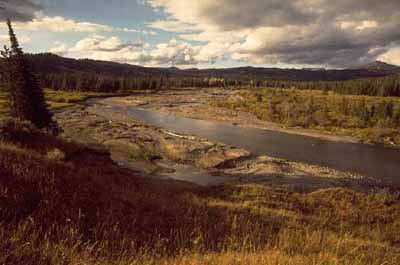 ©2006 National Park Services The braided channels of the Snake River provide wetland habitats for a wide array of Rocky Mountain wildlife, such as Canada geese, ducks, beavers, elk, and moose.

The fierce geology of the Tetons accounts for almost everything unusual about the region: the afternoon thunderstorms that can turn suddenly nasty, the deep canyons that shelter bears and deer, the broad river basin that provides grazing for moose and a refuge for elk, and the long and bitter winters. A walk into any of the canyons between the mountains reveals this geology firsthand.

The Tetons are a textbook example of fault-block mountains. This means that they were pushed up as the earth split along a north-south fault line. As pressures deep within the mantle forced the blocks on each side of the crack together, the western block rose to form the mountains and the eastern block sank to form the valley.

The granite on the summits of some of the peaks is more than three billion years old, which makes it some of the oldest rock in North America. But the mountains themselves are the youngest of the Rocky Mountains. Only 12 million years old, they are mere adolescents compared with the rest of the 60-million-year-old range. Because of their relative youth, the Tetons are more rugged than the rest of the Rockies. The eastern side of the mountains is more abrupt and dramatic than the somewhat gentler western side.

©2006 National Park Services Inhabited by Indians as many as 8,000 years ago, Jackson Hole and the Tetons, reflected here in a channel of the Snake River, were explored in the early 1800s by well-known mountain men such as John Colter and Jedediah Smith.

The History of the Tetons: Inhabitants and Explorers

The first people arrived in Jackson Hole long before white men set foot on the North American continent. A pointed obsidian blade found in the northern end of the park indicates a human presence as long ago as 11,000 years. The first humans who came here were probably hunters and gatherers. By 1600, Shoshone and Athapaskan people had discovered the valley.

In 1807, John Colter, a member of the Lewis and Clark expedition, wandered alone into the Yellowstone-Jackson Hole area and brought back incredible tales of exploding geysers and impenetrable mountains. The region was first named "Colter's Hell" in his honor.

The first permanent settlers arrived here sometime during  the 1880s. One original homestead, a log ranch house built by the Cunningham family on the eastern side of Jackson Hole, has been maintained in the park for historical purposes. The view of the Grand Teton mountains through its kitchen window is a stunning reminder of the hardships and terrible winters the family endured beneath the very same spectacular scenery.

Although Grand Teton is one of the smaller national parks, it offers much in the way of wildlife and scenery. If you plan on visiting Yellowstone or traveling to this corner of the country for other reasons, schedule some time at Grand Teton National Park. It will be well worth the visit.