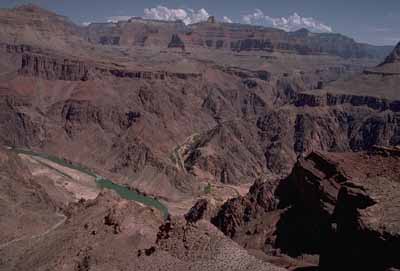 Grand Canyon National Park has long been a source of fascination and inspiration for travelers. Located 250 miles north of Phoenix, it attracts about five million visitors annually. The park offers a wide array of activities, ranging from rock climbing and fishing to aerial tours and hiking. There is something for everyone at this natural wonder.

For modern travelers, there are actually two Grand Canyons to be visited -- the South Rim and the North Rim. Although these two areas are less than a dozen miles apart, they are distinctly different. The North Rim, a thousand feet higher than the South Rim and more remote from major interstates and towns, is less crowded.

The South Rim, with an elevation of 7,000 feet and direct access from Interstate 40 and Flagstaff, can be congested, especially during tourist season. Roughly nine out of ten park visitors go to the South Rim, partly because the views there are thought to be better than those at the North Rim.

The true magnificence of the Grand Canyon takes all visitors by surprise. You approach the canyon from the south, across a gently rising plateau, or from the north across higher and wilder country. Nothing in the topography on either side gives you a hint of what is to soon unfold.

Suddenly you are there, standing on the rim of one of the most sublime and profound spectacles on this planet. The chasm is so vast and so deep that on first sight it looks as though the Earth has opened up to allow us to glimpse the secrets that lie at its greatest depths.

There are a variety of ways to enjoy the Grand Canyon, from descending to its bottom on the back of a mule to running the Colorado River on a raft. Go to the next page for some recreation tips.

Sightseeing at the Grand Canyon 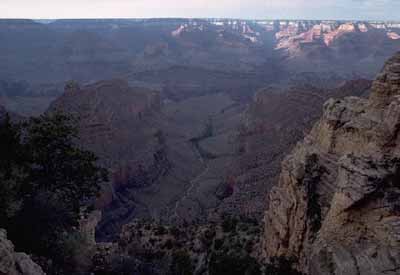 © 2006 National Park Services The Grand Canyon covers 227 miles, a space so vast that only part of it can be viewed from any one vantage point. See more pictures of national parks.

The scale of the Grand Canyon is immense, and even from the best vantage points, only a small fraction of its 227 miles can be seen. Nobody has seen all of the Grand Canyon, despite the fact that millions of people from around the globe have visited.

Most visitors first view this truly unbelievable sight from the more accessible South Rim, which offers a stunning view into the deep inner gorge of the Colorado River. The vista is so dramatic that it can be overwhelming.

What you see extending for a mile down below your feet are millions of years of geologic history. Nowhere else on earth can you view such a complete record of the geologic workings of the planet laid out so clearly and orderly.

There are myriad places in Grand Canyon National Park where you can snap a perfect picture. Here are some ideas:

Into the Canyon: By Foot or Muleback

For those who want a different perspective, three spectacular trails lead down into the canyon from both the North and South Rim. The popular Bright Angel Trail winds eight miles from the South Rim down to Phantom Ranch, a lodge and campground that is clustered among a glen of Fremont cottonwoods on the canyon floor.

An alternative is to try one of the famous Grand Canyon mule rides. As you journey down into the canyon on the back of your small but sturdy mule, you'll have plenty of time to observe a stunning variety of plant and animal life.

© 2006 National Park ServicesMany visitors explore the depths of the canyon on the back of a mule.

The canyon's great depth contains such a range of temperature and precipitation that the variety of local climates equals the natural scope of nearly the entire continent. The mules depart from the South Rim for both day trips and overnight pack trips to Phantom Ranch, where guests can stay in rustic cabins and dormitories. Plan up to 24 months ahead -- available spots fill quickly.

While reservations are required months in advance, rafting trips down the Colorado River are another means of getting deep into the Grand Canyon. These expeditions vary in length from about three days by motorized raft, to 18 days or more by non-motorized devices, which are similar to those used by John Wesley Powell -- the first modern explorer and U.S. Army surveyor -- whose journals are still used as guides by modern river runners.

Offered by a number of river trip companies, trips cover long, quiet stretches of deep water through the heart of the canyon, with stops for overnight camping at several scenic or unusual sights, plus day hikes to ruins, waterfalls, side canyons, and tributary streams. The river journey is broken by more than 140 major rapids. At least two of these are hand-clenching, jaw-wrenching swirls of cascading water and thunderous waves that are rated 10, on a scale of 1-10.

Now that you know what types of activities are available in the Grand Canyon, we'll switch gears and tell you how this geological marvel was formed. The history of the Grand Canyon is covered on the next page. 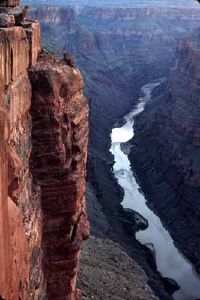