Graceland Mansion and the King: Facts and Figures 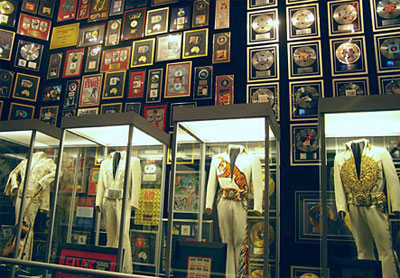 Elvis' famous jumpsuits and gold records are on display in the racquetball building.
Scott Jenkins

Elvis' meteoric rise to fame was like no other. Toward the end of 1955, he signed his first big recording contract with RCA Records. In 1956, everything changed for the future king. Here are his 1956 highlights:

Graceland was the fulfillment of a promise Elvis made to his parents when he was a child. He would often tell them that one day he would be rich and buy them the finest house in town. At the time, that house was Graceland. Here are a few more interesting facts about the Presley home:

Mourners are allowed to visit The King's grave site in the meditiation garden for free each morning.
Mark Perlstein/Getty Images

Elvis Presley died in his home on Aug. 16, 1977. After a late night dental appointment on Aug. 15, Elvis, his cousin Billy Smith and wife Jo, and Elvis' girlfriend Ginger Alden returned to Graceland around midnight. Billy and Jo went home, only to be called back at 4 a.m. to play racquetball with Elvis. After a few games, Elvis played and sang at the piano for his guests for about 20 minutes. Among the numbers he sang in what would be his final performance were "Unchained Melody" and "Blue Eyes Crying in the Rain."

He then told Billy that he was tired and was going to try and get some sleep. At about 8:30 a.m. Elvis told Ginger that he was restless and was going to read in the bathroom. At roughly 2 p.m., Ginger checked on Elvis and found him passed out face down on the floor. She immediately called on the intercom for Memphis Mafia member Joe Esposito. Joe arrived on the scene and attempted to revive Elvis after calling the operator for an ambulance. Twenty minutes later, the ambulance arrived and took Elvis to nearby Baptist Medical Center. Shortly thereafter, Elvis was pronounced dead.

Word spread through the family and the Memphis Mafia that their beloved King was gone. At 4 p.m. that day, Vernon Presley somberly announced to a group of reporters gathered on the steps of Graceland, "My son is dead." Elvis Presley was 42 years old. The official cause of death was listed as cardiac arrest. An estimated 80,000 fans passed through the gates of Graceland the following day to view The King's body. More than 15 million people have walked the shag carpets of Graceland since it first opened for tours in 1982.

Please see the links below for more information on Elvis and the recording industry.