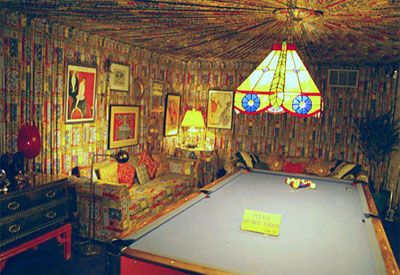 The billiard room is an example of 1970s décor and Elvis flair.
Scott Jenkins

It seems like one man room wasn't enough for The King, so he created two more in the basement of Graceland. On the public tour, you can visit both the billiard room and the basement living room, referred to as the TV room. The billiard room was redone in 1973 and is a great example of Elvis' unusual decorating taste. The couches, walls, and ceiling are all covered in pleated, matching fabric -- 400 yards (365 meters) of matching fabric to be exact. It took three workmen 10 days to cover every square inch of the billiard room with the stuff. Elvis loved to play pool and he was very competitive, as he was in all things. The table still sports a tear in the felt where one of Elvis' friends attempted a trick shot.

Across from the billiard room is the TV room. Why is it called the TV room? Because there are three televisions mounted side by side on one wall. Elvis got the idea for the multiple sets after hearing that President Lyndon Johnson had three sets to keep up with all the major network newscasts at the same time. Elvis loved football though, so he'd typically tune in to the NFL each Sunday. There's also a pull-down movie screen, a jukebox and Elvis' personal record collection. The other noteworthy part of the TV room is the large lightning bolt painted on the wall behind the couch. This, along with the letters "TCB," was Elvis' personal credo and what he considered to be words to live by -- "taking care of business in a flash." The King had TCB medallions and bracelets custom made for himself and his Memphis Mafia members.

Moving out from the main house, your next stop on the Graceland tour is the former racquetball court, which now serves as the display room for Elvis' gold and platinum records, his memorabilia collection and a nice variety of actual jumpsuits that The King wore during his Las Vegas years. The building itself was erected in 1974 when Elvis took up racquetball. He built a two-story, 2,400-square-foot (223-square-meter) recreational area with a court, workout space and private lounge, complete with locker rooms, a Jacuzzi and guest showers. Elvis' personal shower area was in keeping with his extravagant style -- it had five gold-plated shower heads.

The TV lounge in Graceland's basement may be the first example of a "man room."
Scott Jenkins

A swimming pool and a patio were the first things Elvis added to Graceland after he bought it. The surrounding yard was the site of touch football games, go-cart and golf cart races and fireworks battles -- usually at the expense of the lawn. Elvis even had a snowmobile that was converted to drive on grass, which ensured that his gardeners stayed busy. The pasture and stables held Elvis' horses, his favorite being a golden palomino named Rising Sun. At the far end of the yard is the carport, which has a few of Elvis' favorite cars and motorcycles on display.

Just south of the swimming pool is the final stop on the Graceland tour. The meditation garden was built in 1964 and contains a circular pool with fountains and a set of white columns and pergola on one side. In front of the pool is the final resting place of Elvis, Gladys, Vernon and Elvis' grandmother, Minnie May. There's also a marker in memory of Elvis' stillborn twin, Jesse Garon. The King and Gladys were originally buried at Forest Lawn Cemetery, but Vernon had the caskets moved for security purposes in October 1977.