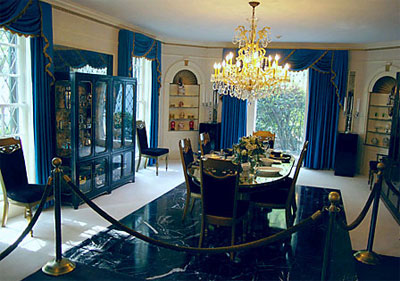 While Elvis entered Graceland through the ornate custom-made front gates, visitors today are shuttled from the ticket office at Graceland Plaza to the front of the house. An empty guard shack sits just inside the gate, where Elvis' relatives were often employed to manage the entry and exit of guests.

Standing outside the front door of Graceland, you might think that the house isn't exactly fit for The King. The classic-revival design is somewhat understated by today's rock star standards, but the home was very large for the 1950s, with nine bedrooms, seven-and-a-half baths, two full kitchens and two living rooms. Immediately upon entering the house, you're transported back in time. The house is modeled in the style that Elvis had it for the first 18 years he lived there. One of Elvis' long-term girlfriends after his divorce, Linda Thompson, redecorated Graceland in bright reds when she lived there. Priscilla Presley and the curators of the museum felt like the tour should showcase the home's original décor.

When you enter Graceland, you'll stand in the foyer where Elvis would greet his guests. The steps to the second floor are directly in front of the foyer but have been closed to everyone but family members. The foyer sits directly beneath the master bath -- where Elvis passed away from cardiac arrest on Aug. 16, 1977. But you probably won't hear that from Graceland tour guides. The upstairs was made somewhat of a mystery to outsiders from the moment Elvis first moved in. Even though Graceland was often crowded with guests, no one was ever allowed upstairs to his private retreat. What we do know is that the upstairs housed The King's personal office, his bedroom and bath, Priscilla's bathroom and Lisa Marie's bedroom and bath. There was also a third upstairs bedroom that was eventually converted into Elvis' personal walk-in closet.

To the left of the foyer is the dining room. Elvis sat at the near-side head of the table when dining with his friends and family, under an Italian glass chandelier. Dinners of 10 to 12 people were common at Graceland, and they were usually late as well. Elvis was a night owl and typically slept till about 4 p.m., at which time he'd have breakfast. Dinners with the "Memphis Mafia," Elvis' entourage, were at about 10 p.m. and consisted of good old-fashioned southern cooking, prepared by his full-time cooks. Elvis also staged poker games at the large dining room table.

To the right of the foyer is the living room and beyond that, the music room. The living room is furnished with a custom-made, 14-foot-long (4.2-meter) white leather couch and 10-foot (3-meter) coffee table. A mirrored wall was added in the 1970s, and the entire room is decked in gold, blue and white. The music room is separated from the living room by an entryway flanked with stained-glass peacocks. This room was the scene of many late night music jams on one of three pianos that lived there at various times -- a white Baby Grand, a gold leafed Baby Grand and an ebony Story & Clark. The music room also has a special wall mirror -- it was one of the few items that made the trip from Elvis' previous house on Audubon Drive.