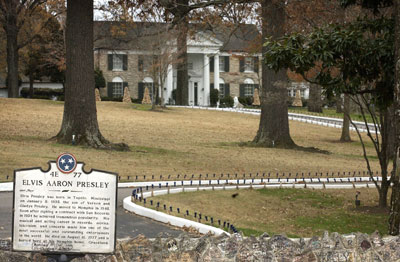 Elvis. With apologies to Mr. Costello, those five letters bring one person to mind -- Elvis Presley, The King. Young Elvis with his sleepy eyes and home-grown good looks. Screaming women being taken from concert halls, passed out on stretchers. Elvis romancing Ann-Margret and Shelley Fabares on the silver screen. Sequined jumpsuits, onstage karate and the bright lights and buffets of Las Vegas.­

And then there's the music. An astounding 140 Top 40 singles, 40 Top 10s and 18 No. 1s [source: Billboard]. He has sold more records than anyone in the history of recorded music, with some estimates coming in at more than one billion records sold worldwide. Simply put, Elvis Presley rewrote the records books and changed the face of music and the recording industry. All with a peanut butter and banana sandwich in hand.

­Every king needs a castle, and for Elvis that was Graceland. Aside from The White House, Graceland may be the most famous dwelling in the United States -- and perhaps even the world. You'd be hard-pressed to find anybody who doesn't recognize those ivory-colored gates at 3764 Elvis Presley Blvd. in Memphis, Tenn. The house where Elvis lived and died is so famous that it's registered as a National Historic Landmark.

Many people may not know that Elvis wasn't the original owner of Graceland and didn't even have a hand in naming it. Graceland was built by Dr. and Mrs. Thomas Moore nearly 20 years before Elvis' blue suede shoes touched shag carpet. The land had been in Mrs. Moore's family for generations, and the property was named after her great aunt, Grace Toof. Elvis bought the home in March 1957 -- only nine years after his parents bought him his first guitar and just four short years after he graduated from Humes High School. The King's rise to the top was a quick one, and Graceland came to symbolize the success of a poor kid from Tupelo, Miss.

Graceland wasn't Elvis' first big purchase once he hit the big time -- he lived for 13 months in a ranch-style house on Audubon Drive. The Audubon house was in a nice neighborhood, but Elvis was destined for greater things. Graceland has grown some since Elvis bought the house and nearly 14 acres in south Memphis for $102,500 -- close to $800,000 in today's dollars. The original home was about 10,000 square feet (929 sq meters). Elvis expanded it over the years, bringing the total square footage to over 17,000 square feet (1,579 sq meters) and the number of rooms to between 18 and 23, depending on his remodeling whims. The interior was redecorated quite a bit as well in the 20 years that Elvis inhabited Graceland. It says a lot about the man that he never packed his bags and moved to Los Angeles or Las Vegas. Elvis was a Memphis boy through and through and never had any desire to leave his castle.