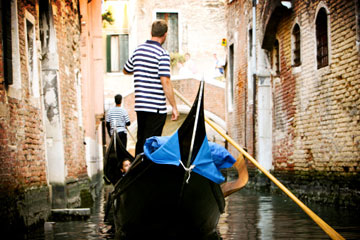 Gondoliers are more than taxi drivers. It's said that because of their constant proximity to noble passengers, gondoliers knew anything and everything about the ancient city of Venice, especially the secrets of the city's illicit affairs, which frequently took place aboard these romance-inducing rides.

After the sumptuary law of 1633, gondoliers were required to wear black clothing to match their black gondolas. But after World War II, gondoliers started wearing the striped shirts many of us picture today. These gondoliers are licensed by a guild that requires a stringent comprehensive exam -- only three or four new licenses are issued each year, and traditionally, these licenses are passed down from father to son through a family, with the father holding the position until the son can pass the exam. Despite many previous applications, it was only in 2010 that the guild licensed its first female Venetian gondolier. In fact, the tradition of gondolier families is so strong that the profession has spawned its own dialect, a mixture of Italian, Spanish and Arabic, which is still spoken by many gondoliers [source: UNESCO].

Though tourists often envision a gondolier singing to them, that's not how reality plays out. Travel writer Gene Openshaw recalls that when his mother asked if their gondolier would sing, the gondolier replied, "Madame, there are the lovers and there are the singers. I do not sing" [source: RickSteves.com]. If you prefer music, you'll have to hire a singer separately, usually with an accordion accompanist.

While a rowboat with one oar is more a merry-go-round than a mode of transportation, the asymmetry of the gondola helps to keep the craft pointed straight. Also, the gondolier counteracts the boat's spin by ending each stroke with a push in the shape of a 'J' or 'C,' like paddling a canoe.