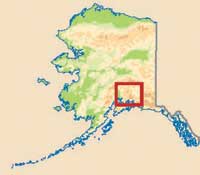 The Glenn Highway is a place where geology, culture, and scenery come together to create a majestic and rugged landscape that can be seen only in Alaska. Winters bring the fascinating Northern Lights among snowcapped mountains. In the spring, hawks, eagles, and falcons can be seen gliding over the Glenn Highway. Summers bring endless days of wildflowers and green forests along the Matanuska River Canyon that runs between the Chugach and Talkeetna Mountains, creating beautiful views all the way.

Among the mountains and the unforgettable seasons lives a distinct Alaskan culture that has been developing for centuries -- beginning with the native Alaskan culture that was altered so much with the arrival of Russian fur traders and, later, gold miners from the lower U.S. states. The history of Alaska and its cultures can be seen along the byway in museums and historic places.

Following are specifics on these historic places as well as interesting facts about the many archaeological, cultural, and natural sites you'll discover on the Glenn Highway.

Although pieces of archaeology can be found all over the ancient lands along the Glenn Highway, many of them are so delicate that few people know about them.

In Knik, south of Wasilla, archaeologists are uncovering a village and many artifacts. The Knik town site became a Euro-American trading and supply post in the late 1800s. Archaeologists have uncovered an old blacksmith shop, an assayer's house, and tools used for refining gold. As the town site is excavated, the discoveries and artifacts are put on display in the Knik Museum in Wasilla.

As you travel the Glenn Highway, you may also want to explore Anthracite Ridge near Sutton. The ridge was formed when a warmer climate existed on the lands that are now Alaska. Ginkgo trees and other warm vegetation were buried here to create the coal resources and the fossils that attract both miners and paleontologists. Bones from a dinosaur known as the hadrosaur were also found near the byway at Gunsight Mountain in the Talkeetna Mountains. The dinosaur has been affectionately dubbed "Lizzie."

Cultures from all over the world have combined along the Glenn Highway. Museums, architecture, and historic districts celebrate the unique history of each culture. To discover the original cultures of Alaska, visit the Anchorage Museum of History and Art or the Alaska Native Heritage Center.

View Enlarged Image Follow this map of Glenn Highway if you're up for adventure.

Native society was structured around the family unit. Families hunted together, and when fishing, hunting, or trapping was good, the entire family experienced prosperity. But survival in the Arctic was always a challenge. This way of life remained unchanged for many years, until a new culture emerged during the late 1700s.

When people from Russia began to come to Alaska, they brought their religion with them. Their goal was to introduce the native people of Alaska to Christianity, and one of the rules was that the people could accept the religion only of their own free will. Because of this, the Russian priests who lived in Alaska were extremely dedicated to supporting their parishes during the 100 years they were in Alaska. Yet native Alaskans often combined cultural beliefs: Native people who converted to Orthodoxy would bury the remains of their dead but also build a small "spirit house" above the grave.

An economic culture began to grow in Alaska during the 1870s. Rumors of coal, timber, and especially gold brought another significant culture to the land. Mining towns sprung up all over, and Alaska embarked on another great change.

Many of those mining towns became the central cities of Alaska; descendants of gold miners became coal miners. Today, Independence Mine State Historical Park allows visitors to explore the lifestyle of the early gold miners in Alaska.

During the 20th century, people continued to gather in Alaska for relief from the Depression or for military strategy during World War II. It was during wartime that the Glenn Highway was constructed as an attempt to better connect Alaska with the lower U.S. states.

Alaska is a romanticized land with a history of gold camps, dogsled races, and native Alaskans. Native people with the courage and endurance to establish their culture in this rugged territory settled here nearly 35,000 years ago. Since then, Alaska has maintained its pristine wildernesses, unique wildlife, and exotic atmosphere.

A people known as the Athabascans came from Asia and were the first inhabitants in the lands where the Glenn Highway is now located. The village of Eklutna is a settlement that has been inhabited since the late 1600s by these people.

It was not until the 1700s that the land and its people were recorded by Europeans. Explorers James Cook and Vitus Bering opened up European trade between native people in Alaska and their own countries. After the Russian-American Company began to establish missions, trade, and government here in the late 1790s, the people of Russia and Alaska interacted for nearly 100 years, for better or for worse, until another country began to take interest in Alaska.

In 1867, the United States purchased Alaska from Russia and caused a scandal among the American people. They were mortified at the 7.2-million-dollar price tag that the government was willing to pay for a frozen wasteland. But with the continued wealth achieved from fur trapping and gold discovered in Alaska, the area's reputation improved in the eyes of Americans, and people from the lower states began to flock to the territory.

The need for roads in Alaska came with the expanding population of miners and trappers; during World War II, Alaska's strategic position also made it a candidate for improved roads. As Alaska's roads improved, communities grew up and were able to have contact with each other. In fact, the Glenn Highway is known for connecting Alaska's history and culture.

Dramatic natural events formed the landscape along the Glenn Highway, and many of these events continue today. Earthquakes and the movement of Earth's plates thousands of years ago created the Chugach and the Talkeetna Mountain ranges, and the rich minerals found in the mountains have been drawing people to Alaska for more than 100 years. It was just off the Glenn Highway where some of Alaska's first gold was discovered.

Today, mining is still occurring in the mountains, as geologists search the sediment for fossils and other geological remnants. Rivers, wind, and ice all have played a role in the formation of the mountains, moving the rich sediment from one end of the landscape to the other.

Although the Glenn Highway runs through the tundra, this ecosystem is far from a frozen wasteland. You may see salmon and trout swimming in the rivers while a moose wanders by the riverside. Flowers, trees, bushes, and meadow grasses are an array of colors. Accumulating meltwater forms wetlands and marshes where birds and waterfowl gather. And when all the land is blanketed with snow, spruce, aspen, and other trees create a winter wonderland.

Getting a good dose of nature isn't difficult when you visit the Glenn Highway. Chugach State Park is accessible from the byway, and places such as the Palmer Hay Flats and the Matanuska Glacier provide opportunities to spot wildlife or get a closer look at a glacier. With the Chugach and Talkeetna Mountains surrounding the byway, you have many opportunities for hiking and exploring these ancient landforms.

In a place where winter engulfs a large part of the year, winter recreation has been perfected. The lodges and roadhouses along the Glenn Highway are perfect places to stop in the winter and enjoy cross-country skiing, snowmobiling, and snowshoeing. You can hardly help enjoying a winter night in Alaska, where the short days lead to extra-long nights. You may want to do some stargazing here or watch for the Northern Lights.

But even in Alaska, the snow melts and summer activities become available to travelers and residents. Alaska is the Land of the Midnight Sun, where, in summer, the long, sunny days make up for the nights of winter. Many people come just to see the wildflowers and watch for wildlife.

During March, April, and early May, the air is filled with birds, migrating and moving. A stop at milepost 118 provides an excellent opportunity for viewing birds of prey.

The melting rivers and streams are another source of activity. Of course, the fishing in Alaska is superb, but anglers aren't the only ones who enjoy the rivers; rafters and kayakers find places on Alaska rivers to test their skills. In Anchorage, a biking trail is located along the byway for cyclists and in-line skaters to make their way from Anchorage to Chugiak.

States it runs through: Alaska

Considerations: The Glenn Highway is subject to avalanches; when traveling during winter, check road and weather information prior to the trip, and carry appropriate winter gear. Pull-offs are plowed and available for viewing in the winter.