What's the friendliest destination on the planet? 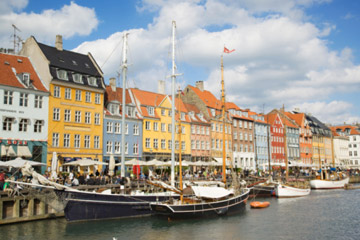 Image Gallery: City Skylines Copenhagen is the capital city of Denmark, home to some of the friendliest people in the world. See more pictures of city skylines.
Hemera/Thinkstock

To decide where the friendliest place on Earth is, you may first look at a list of the happiest destinations on the planet. But the problem with words like "friendly" and "happy" is that they are subjective and open to a lot of varied definitions. Researchers at the University of Leicester worked on this problem, and through their efforts they created the first World Map of Happiness. They asked more than 80,000 people worldwide a series of questions that boiled down to three main points: health, wealth and access to education. They found that those countries with the best health care, highest Gross National Product per capita and best educational opportunities also tended to be the happiest. Heading up the list of the best of the best is perhaps an unlikely country: Denmark [source: University of Leicester].

The major factors that determine the Danes' happiness might come as a surprise to some, since it's not money and certainly isn't weather that has them so content. In fact, in addition to the fact that Denmark is anything but a tropical paradise, the Danish have some of the highest taxes in the world, with some citizens paying upward of 50 to 70 percent of their income in taxes. The upshot is that no matter your profession, you are roughly on the same economic level as your fellow citizens. Therefore, most Danes are encouraged to follow the career path that will offer them the most personal satisfaction, instead of choosing a job solely for the money or status. The freedom to choose the professions they enjoy has, in part, made them the happiest.

Also, all that tax money goes toward free health care and education for all of Denmark's citizens. So, not only are the Danes working in jobs they enjoy, they are ensured that they will be supplied with basic medical care and a proper education through the university level. Also, Denmark spends more on children and the elderly than any other country in the world.

So, the Danes are happy, but are they friendly? Read on to find out how happiness and friendliness are connected in Denmark.

The Friendliest Place on the Planet

So how could Denmark's happiness make it a friendly country, too? Well, according to a report by ABC News, one of the defining features of the Danes is their very social nature. Approximately 92 percent of the country's citizens are involved in some sort of social club, from model trains to laughing practice. Additionally, if a Danish person gets some friends together for a monthly book club meeting, there is a chance the government will send some money to the group. It is hardly a surprise that with all this social interaction, the Danish seem to be some of the happiest people on the planet, and it follows that a happy population with a strong social life would then be the friendliest around.

Furthermore, the Danish are some of the most trusting people in the world, with many of their vegetable stands running on a pure honor system and bicycles left unlocked on the street. Such trust can only breed friendship and encourage a strong bond between the citizens. Also, part of that trust comes from the fact that the average Danish person, while able to afford nice things, is hardly interested in the material value of the objects he or she purchases. Instead, Danes are simply happy with what they own. By not putting so much pressure on obtaining material goods, they tend to value their friendships even more [source: ABC News].

Finally, in Copenhagen, a city of more than 1 million residents, 1 in 3 people commutes to work or school on a bike. That means less pollution and less congestion. And really, how can you be anything but friendly when biking around the happiest city on the planet?

If you want to visit the friendly Danish but can't quite swing that plane ticket just yet, read on for links to more information about Denmark, happiness and friendship.

A Brief Guide to Denmark

Siberia's Lake Baikal Is the World's Oldest and Weirdest
Can you cook a meal on your car's engine?
Mammoth Cave National Park