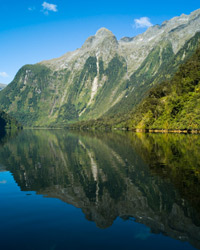 A view of Doubtful Sound from the water. (We would like to posit that Doubtful Sound is the best name ever given any sound anywhere.)
Paul Kay/Oxford Scientific/Getty Images

Waterfall hunters might be forgiven for missing the smallest of the 10 waterfalls on our list. For one thing, Browne Falls sits near the southern tip of New Zealand, emptying into Doubtful Sound along the coast of Fjordland National Park. The sound (which is a large type of ocean inlet) sits miles from the nearest road and far from the island nation's major cities.

The waterfall's path doesn't help its visibility, either. Starting at a height of 2,030 feet (619 meters), the falls course through a series of gradual, frothing drops before plunging into a deep, brushy ravine. The lower half of the falls winds through the dense vegetation, which hides its path from most casual onlookers.

This has made Browne Falls a target of speculation: Some argue that Sutherland Falls, also located in Fjordland National Park, is actually New Zealand's highest waterfall. That cascade plunges vertically over three straight steps in a misty, highly visible display. But with a total height of 1,902 feet (580 meters), Sutherland falls slightly short of Browne [source: World of Waterfalls].