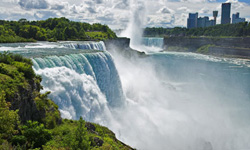 Everyone likes a list. Forbes Magazine annually lists the 50 richest people in the world. Every Christmas, children make wish lists to send to Santa Claus. A range of charts list top songs and albums every week. And at the end of every year, newspapers, magazines and Web sites compile various lists of reader’s favorites, from cars to chocolates and fine wine.

One subject primed for listing is waterfalls. Although a waterfall seems simple in nature -- it's usually a river that plunges over a rocky ledge into a pool of water, then continues flowing as a river -- the visual effect of a large waterfall in a beautiful setting can be breathtaking.

But despite their beauty and common billing as local landmarks, compiling an accurate list of the highest waterfalls in the world is not an easy task. Waterfall enthusiasts and geologists debate points such as flow volume, whether the falls are composed of one drop or several and of course the methods for accurately determining the height of the falls [source: World Waterfall Database].

Many of the world's tallest waterfalls aren't very well known, and that's not because they aren't captivating -- it's mostly because they're in very remote, rugged locations. And because they're so far off the beaten path, a few of these giants were only recently discovered. So although this list is up-to-date, there may be other waterfalls out there even taller than these 10. Read on to learn about the current kings in the waterfall world, but don't be surprised if a new discovery or two changes the list in the future [source: Merco Press].