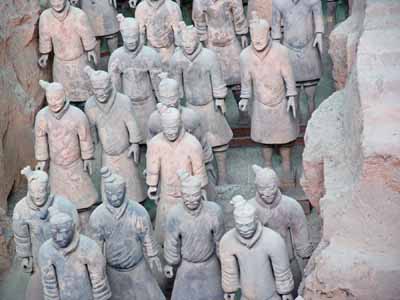 Famous Landmarks Image Gallery Famous landmarks include everything from the fantastic to the elegant, like the Terra Cotta Army in China. See more pictures of famous landmarks.
Publications International, Ltd.

The world’s famous landmarks have been celebrated for centuries. Ever since a Greek po­et named Antipater of Sidon compiled a roster of the Seven Wonders of the World in the second century B.C., people have made lists of awe-inspiring landmarks.

As a historical record? A guide for travelers?

Or perhaps as a reminder that despite mankind's sorry catalog of wars and cruelty, we have also achieved the sublime -- and left tangible proof for the ages?

We have compiled articles on 46 of the world's greatest landmarks, spanning continents and eras. Each profile gives details on the inspiration, creation, and fascinating features of the site.

Also included is a link to the ma­p of the country where the landmark is located, along with links to other interesting monuments, historic sites, and destinations. Browse our guide at the bottom of this page to find a landmark that suits you.

Landmarks reveal much about the great cultures of the past, in the same way that books pass on the ideas and values of people who came before us.

Newer landmarks reveal our own times -- ingenious, high-tech structures such as the Guggenheim Museum in Bilbao, Spain, and the Sydney Opera House in Australia.

New or old, the great landmarks send messages written in stone and sweat. What they say will endure for the ages.

Here's our guide to dozens of famous landmarks around the world: