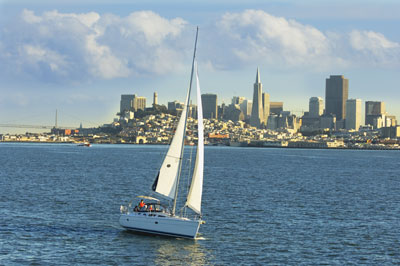 Sailing on a nice day is certainly a San Francisco Treat -- unless you fall overboard and die. See more pictures of sailing.
Mitchell Funk/Getty Images

The sun is shining, the water is warm an­d you and your family are heading out for a three-hour tour on your rented sailboat. You've hoisted the sail, the kids have swa­bbed the deck and you're bearing away toward a lovely horizon. You have plans to drop anchor, fish a bit and if you're lucky, grill up some fresh seafood for everyone. Then the unthinkable happens. The boom comes loose, and when you move to­ secure it, you slip and fall into the ocean. You sink for a moment before bobbing back up to t­he surface, only to see the boat careening away, your family searching in vain for a glimpse of you.

­It may sound like a worst case scenario, but a man overboard is actually one of the most common boating emergencies. There are lots of reasons someone suddenly might find himself in the drink. Bad weather is one. Storm fronts can roll in quickly at sea, with strong winds and waves that tilt a boat or ship to-and-fro, making it tough to stay on your feet on deck. Another reason is simple inexperience -- not watching for swinging booms, not realizing how slippery the deck is, moving around the edges without holding on. You could be leaning over the edge, seasick, or maybe you've had too much alcohol and carelessness tilts you into the seawater.

You may think this kind of thing only happens on small sailboats or fishing vessels in rough seas. But on major cruise lines between 1995 and 2007, there were nearly 100 persons overboard [source: cruisejunkie.com]. In some of these cases, people leapt from the ship, either in a suicide attempt or under the throes of alcohol. Other cases were accidental. At least one is believed to be a murder case. The biggest challenge when someone falls from a cruise ship is stopping or turning the ship. It's hard enough to turn a small motorboat or sailboat; it takes much longer for a cruise ship.

Knowing the correct procedures to follow in a man overboard scenario is the only chance you have at pulling a loved one from the water or being rescued yourself. How easy is it to spot a man overboard? Find out on the next page. 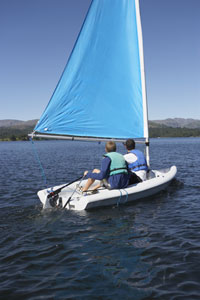 When a person suddenly slips overboard, it's frightening, to say the least. The good news is, if someone spots the accident and everyone works together, there's a good chance you can get your companion back into the boat alive and well. The captain should be in charge of leading the rescue effort and assigning jobs as soon as he's aware of the accident.

Step one: The first thing to do if you see someone go overboard is shout "MAN OVERBOARD" as loud as you can along with a port (left) or starboard (right) location. You need to keep your eyes on the victim at all times, so channel your inner drill sergeant and scream. Keep yelling until you get a response that someone else has heard you. As soon as the shout is relayed to the captain, he should shut down the engines or drop sail immediately.

Step two: The spotter should point -- and keep pointing -- at the victim. Spotting and keeping an eye on someone in the middle of the ocean is extremely difficult. Your boat is most likely speeding away in the opposite direction, so if you divert your eyes for even a split second, you could lose him or her. Pointing will give everyone else on board immediate direction. Ideally, the person that spotted the accident should remain the spotter throughout the entire rescue. If you need to reassign the duty, make sure the new spotter has locked eyes on the victim.

Step three: Have someone throw a flotation device into the water for the victim to swim to. Hopefully the person is wearing a personal flotation device (PFD), but many recreational boaters fail to do so. If your boat is traveling at a high rate of speed, start throwing in anything that floats to leave a trail to the scene. Seat cushions, magazines, even your hat -- anything visible that floats can work.

Step four: If you have a smaller or slow-moving boat, you may be able to coast to a stop and throw a lifeline to the victim, and the crisis is averted.

Step five: If the boat has gone too far past the victim, then step four isn't possible. In this case, you'll need to make a turn back to the victim to pick him or her up. Generally, two types of turns are used to quickly return to a point of origin -- the elliptical and the Williamson. The elliptical is an oval (racetrack-shaped) turn and results in an approach to the rear of the victim. After the vessel has some space from the victim, it turns hard on same the side that the incident occurred 180 degrees, straightens out and then performs a second 180 turn to circle around toward the victim. The Williamson turn -- named for United States Navy officer John Williamson -- may be a little quicker. For this one, make a hard turn immediately toward the same side the person went overboard and hold a straight line at 60 degrees from the victim. Then turn hard back the opposite way and circle around until you're on a course heading straight toward the victim from the front. The Williamson takes the shape of a sideways teardrop, with the point of origin being the duct.

Once you've boated back to the victim, how do you pull him or her from the water? Find out on the next page. 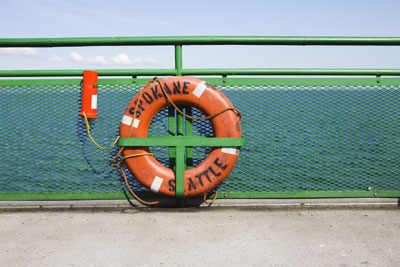 Sometimes a rescue can be as simple as tossing one of these into the water.
Paul Edmondson/Getty Images

At this point, your boat has returned to the victim's side. The captain should be careful to approach slowly and cautiously.

Step six: Toss a lifeline with a loop tied into the end to the victim and have him or her hook the loop around their body under the armpits. Tow the person in slowly. If the boat is small, get two people to carefully lift the victim up into the boat by both arms with the victim's back facing them. You can also pull the victim by the life vest if he or she is wearing one. If the victim is strong enough, he or she may be able to climb aboard themselves with the help of a swim ladder.

Unless the accident occurs in the warm waters of the Caribbean, there's a good chance the water is cold. Water has a drastic effect on the body and can cool a person down 25 times faster than cold air [source: boatingbasicsonline.com]. Once aboard, you may find that the victim is suffering from one of the following cold-related illnesses:

Cold shock - Dropping into cold water can cause a quick gasp that lets water into your lungs. If this happens you could drown immediately.

Swimming failure - In cold water, you'll lose dexterity in your limbs quickly and may not able to swim well. When you lose coordination, it's tough to keep your head above water, increasing your risk of drowning.

Hypothermia - Hypothermia happens when your body loses more heat than it produces, and your core body temperature drops below 95 degrees. Some of the symptoms of hypothermia are:

To combat hypothermia, get the victim into a warmer environment immediately. Cover him or her with blankets or sleeping bags. Most heat is lost through the head, so cover it immediately. Remove wet clothing and replace it with some dry duds. Always handle hypothermia victims carefully, since they can easily go into cardiac arrest. Keep him horizontal and calm -- reassure him that he's going to be fine. Huddle around and hug the victim to create warmth and then seek professional medical attention as soon as possible.

If you haven't succumbed to cold shock, move ahead to the next page to learn what you can do if you're the person overboard. 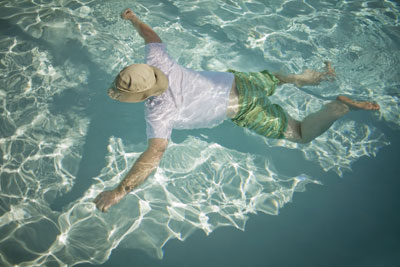