Browse the article Extreme Sports Athletes Crave the Reward, Not the Risk 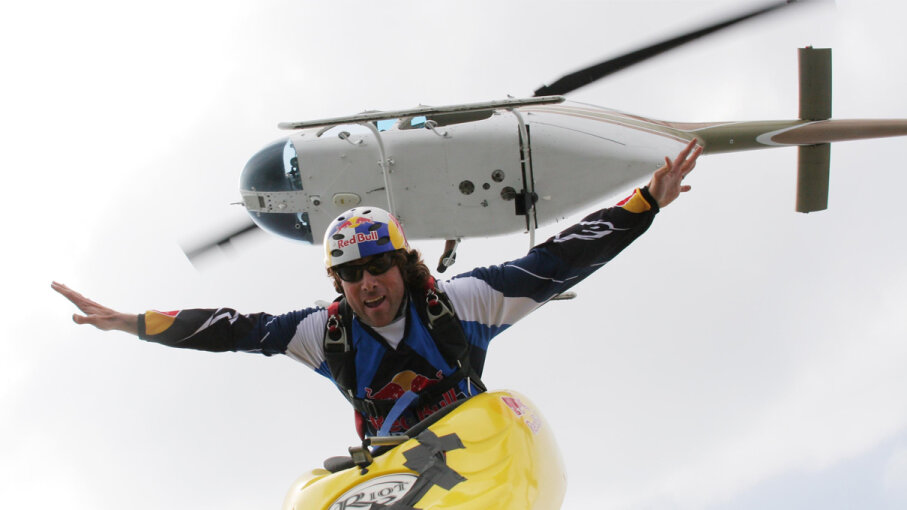 Miles Daisher "skyaks" out of a helicopter 13,000 feet (3,962 meters) high in the sky. The daredevil digs jumping out in a kayak while skydiving, but he's also jumped out on a bike, skis and boards. John Charles Colclasure/Barcroft Media/Getty Images

The people who jump from bridges or out of airplanes or off cliffs are, to the couch-bound and desk-chained below, a little loony. They are, at the very least, reckless adrenaline junkies. They might have — this is a common epithet — a death wish.

"I'm not into argue and debate," says Miles Daisher, a man who once flung himself from a bridge (yes, he used a parachute) 57 times in a single day. "But I can tell you, from my own personal experience … I have a life wish, man. I want to do as much as I can in this time I have on Earth."

For at least two decades, scientists have studied skydivers, BASE jumpers, big-wave riders and their kin to see what makes them tick. (BASE is an acronym for jumping from buildings, antennas, spans or Earth, and it's considered inherently more dangerous than your garden-variety parachuting from an airplane, because those structures are much closer to the ground.) A common theme in those studies: People who participate in "extreme sports" are motivated by a need to take risks and score an ever-elusive high.

But a new study by two psychologists refutes that notion, including the whole "death wish" thing. Instead, it suggests real, albeit somewhat intangible, benefits to explain why some take risks that make many of us shudder.

Base jumper and Frenchman Vincent Philippe Benjamin Reffet leaps from the 300-meter (nearly 1,000-feet-high) open deck of Malaysia's landmark Kuala Lumpur Tower during the International Tower Jump on Sept. 27, 2013. Some 103 professional base jumpers from 20 countries were slated to jump.
MOHD RASFAN/AFP/Getty Images

Rolling the Dice Is Not the Thrill

To back up for a second: It's important to note that, despite what outsiders might think, these risk-takers don't see themselves as risk-takers.

"Risk is everywhere and for many it is more risky driving on the roads where you have no idea what other drivers are doing," Eric Brymer, one of the authors, explains in an email. "In their chosen sport they have a very good understanding of the activity, themselves and the environment. So [there is] danger in the sense that if it goes wrong death is likely but that is not the same as risk. Risk is about likelihood and consequence. The consequence might be serious but as they have such great knowledge the likelihood is low."

Athletes like Daisher spend countless hours working on physical fitness, obsessing over the latest equipment and perfecting techniques to minimize risk. Practice helps, too. Daisher has BASE jumped more than 4,300 times and logged more than 7,200 skydives. Many of his jumps are in wingsuits.

All of that repetition and obsession minimizes risk so that extreme sports enthusiasts like Daisher can reap the benefits that Brymer and his co-author, Robert D. Schweitzer, detail. Those benefits, they say, come from an experience that is at once "ineffable," "transformative" and "transcendent."

"'Cause you'll never 'effing' be able to describe it," says Daisher with a laugh.

Again, Brymer and others insist that extreme sports are not about sticking your neck out. They're about experiencing something more than what is available in our everyday lives.

"Far from the traditional risk-focused assumptions, extreme sports participation may well facilitate more positive psychological experiences and express human values such as humility, harmony, creativity, spirituality, and a vital sense of self that enriches everyday life."

Brymer interviewed 15 extreme sports participants, 10 men and five women, in Australia, Europe and North America for the study. (The authors define extreme sports as "independent leisure activities in which a mismanaged mistake or accident would most likely result in death.") Three themes emerged: Extreme sports are invigorating, hard to describe and sometimes transcendent.

Invigorating: One mountaineer likened his sport to a "life altering powerful energy."

Hard to describe: "It's just three hours of AAAAAARRRRR (yells out)," said one skier.

Transcendent: A BASE jumper told the authors, "You do it because you are obviously hitting some sort of plane that you can't normally hit."

Daisher, too, has a unique way of explaining what he feels when he jumps.

"When you're into the 'gnar zone'" — and by that, he means gnarly, Daisher says — "that's when you just be, and you just forget about everything."

Daisher had just pulled off eight BASE jumps from the I. B. Perrine Bridge in his home of Idaho Falls, Idaho, on the day HowStuffWorks talked to him, with plans for 12 more that day. He and the participants in the study report that there is some carryover into their normal lives from their decidedly outside-of-normal activities. But the authors conclude that the real payoff is in the moment: "While benefits might transfer to everyday life, the essential element of the experience seems to be during the activity."

The most reaffirming part of the study may be this: For those involved in extreme sports and some of the Earth-shackled among us who may consider a fling on the wild side, it's worth it.

"[We should] move away from the notion that extreme sports are about risk and risk taking and therefore only open for a few people who have the required personality structure," Brymer says in his email, "to a more inclusive perspective that means everyone can get involved. In the end not everyone will want to be an extreme sports participant but adventure is very powerful and beneficial."

Now That's Interesting
Extreme sports athletes may not participate strictly for the risk — they aren't risk-takers, per se — but it's there nonetheless, and nowhere more than BASE jumping. In one 2002 study, researchers determined there was one fatality for every 60 participants in BASE jumping. You're 5 to 8 times more likely to be hurt or killed in a BASE jump than in a skydive, a 2007 study found.