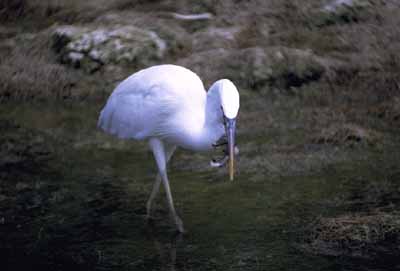 Everglades National Park occupies a sizable portion of south Florida. It sits near the southern tip of the state, west of Miami and south of Alligator Alley, and covers a million and a half acres.

The park includes such singular habitats as mangrove and cypress swamps, freshwater lakes and swamps, subtropical hardwood hummocks, saw grass prairie, and marine islands. Easily accessible from three major airports (in Miami, Fort Lauderdale, and Fort Myers), it is the only place in the United States where crocodiles can still be found. Appropriately, the great reptile has become the symbol of Everglades National Park.

Other services: An information station, ranger station, and park lodge.

In the air, on the ground, and in the water, living wonders abound in Everglades. The mix of plant and animal life is unique on our planet. This subtropical wilderness contains more than 700 plant and 300 bird species, and it provides a haven for many endangered animals, including the great crocodiles, the Florida panther, and the manatee. Other native animals, such as alligators, egrets, and bald eagles, once were also endangered but exist in much healthier numbers today.

Everglades National Park is one of the world's most complex ecosystems, a seemingly endless swamp of still water, saw grass, junglelike hammocks (masses of vegetation that look like islands), mangrove forests, and thick black muck.  The park serves as one of the last refuges for the Florida panther, which is among the most critically endangered mammals on the planet.

Of course, visitors are always on the lookout for the awesome American Crocodile in Florida Bay. How to be sure it's a crocodile and not the more common alligator? Its bottom teeth will be visible even when its mouth is closed.

When you see a crocodile surging through the turgid waters of a mangrove swamp, its tapered snout sprouting enormous fangs and its great knobby back looking like some kind of moving island, fascination almost overcomes your fear. These great reptiles are unchallenged sovereigns in their wetland domain. When a crocodile wants its progress unimpeded by other animals, or the few brave people who dare venture into its territory deep within the swamps, it gives the water a loud, angry whack with its tail. The message is clear: Everyone and everything had best scurry for cover.

Exploring the Everglades
Despite the fact that this imposing wetland seems to go on forever, with only isolated patches of dry land, there are a number of ways to penetrate and explore the Everglades.

In addition to boats and canoes, the park also has a number of nature trails that lead into the heart of this wilderness. Gumbo-Limbo Trail is one of the quickest ways to explore the rich terrain of the park. This third-of-a-mile-long loop winds through mango trees and ends at a junglelike hammock. The little raised island of tropical hardwood trees (including several stunning strangler figs) seems to float above a spectacular sea of saw grass inhabited by flocks of herons and egrets.

The hammock's slight elevation above the surrounding water supports a startling array of life, including foxes, raccoons, snakes, deer, and birds. There are also solution holes here. These depressions in the limestone bedrock hold moisture during the dry season and become habitats for many kinds of insects and birds. As these solution holes fill with organic material, such as bird droppings, they become tiny ecosystems and may eventually become hammocks themselves.

The best time to visit the park is mid-December through mid-April when the bugs are less prevalent. At that time of the year, people can escape the crowds by boating on the interior backwaters or by kayaking among the coastal islands.

Everglades National Park Photo Opportunities
Unlike many of the national parks, the Everglades does not contain any must-see monuments, such as a striking canyon or a towering mountain. Instead, the swamps and hammocks are the show -- and they provide wonderful photo opportunities. Bring your camera to these sites, which are known for their abundant wildlife:


The vast wilderness known as the Everglades delights visitors with its unusually rich vegetation and stunning bird and animal life. However, the ecosystems that make up this region are extremely fragile and are imminently threatened by pollution and the diversion of fresh water. To learn about the dangers threatening to irrevocably damage this valuable park, go to the next page.

In the swamps of Everglades National Park, there is much to be learned about the unusual adaptations and delicate balances that support the Everglades's stunning array of life. You might see white egg sacs on a branch that will soon hatch apple snails, the main food of the endangered snail kite, which has a special bill for removing the snails from their shells. Or you might learn about a fish called the gar, which has an air bladder that acts like a primitive lung that allows it to live encased in mud during the dry season.

The source of all this life is water, with its cycle of flow and drought. During the wet season, from mid-April to mid-December, the Everglades becomes a river only inches deep but miles wide. It flows so slowly that its movement is all but invisible. In the dry season, during the winter months, the park's rich pulse of life slows down and awaits the new flow of water.


Every kind of life in the park, from plankton to panthers, depends upon this annual rhythm. Even people function on this natural timetable; park officials schedule most activities during the dry season, since high humidity and clouds of insects, especially mosquitos, make the wet season extremely disagreeable.

Congress created the first national parks, such as Yellowstone and Yosemite, to preserve spectacular and unusual scenery. Established in 1947, Everglades National Park was the first park specifically designated to protect a large and fragile ecosystem that was facing a grave threat from encroaching civilization. Because human activity was interfering with the yearly water cycle, this land was in extreme danger of being destroyed.

Water once flowed out of Lake Okeechobee without interference, but the rapid development of southern Florida began to overwhelm the Everglades about a century ago, when large tracts of wetland were considered potentially rich for agriculture and drained. Since then, canals, levees, and dikes have diverted more and more vital water from the Everglades to supply the needs of agribusiness, as well as commercial and residential developments.

In 1939, as a result of overdraining, the Everglades was engulfed by immense fires. During the 1960s, retaining walls were built on the south shore of Lake Okeechobee, and land has been developed in Big Cypress Swamp. This has disrupted the natural flow of water and poses a serious threat to the park's ecosystem.

Today, irrigated farmland comes right up to the park's gates. In the past few years, the number of herons and other wading birds in the park has dramatically declined, and there are just a few Florida panthers left out of a population that once roamed southern Florida at will.

Park officials want to purchase privately held wetlands east of the park, hoping that this will give Everglades a greater share of the water it so desperately needs. If its area can be extended, the park will be able to continue to protect this extremely fragile and extremely valuable ecosystem.

The endangered Everglades cannot continue to support its myriad of wildlife inhabitants unless a solution to the water-shortage problem can be found. A trip to Everglades National Park convinces many visitors that these Florida wetlands must be saved so that future generations will have the chance to see the same delightful wonders we see today.
©Publications International, Ltd.