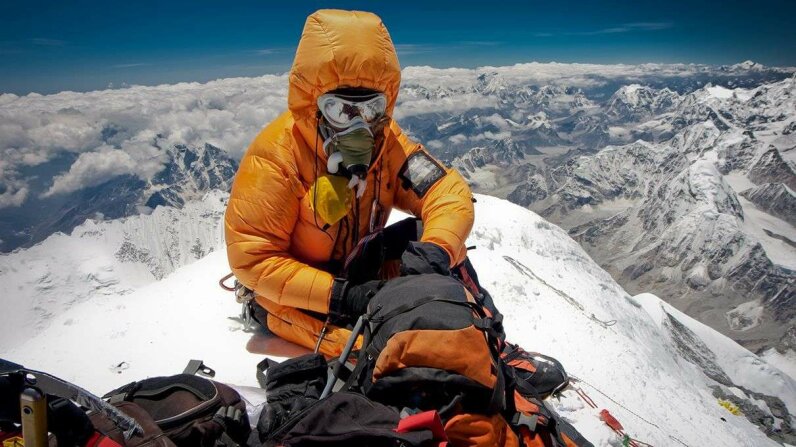 The ultimate selfie? A climber rests alone on the summit of Mount Everest. Harry Kikstra/Getty Images

In the 60-plus years since Edmund Hillary conquered Mount Everest — the singular feat that put the Sir in Sir Edmund Hillary — a lot has changed in how climbers approach the world's highest mountain.

Much, too, has stayed the same. Everest remains a place that adventurers put at the top of their bucket lists; a place literally on top of the world. It also remains, for many, a mystery shrouded in clouds in an unknown and unknowable part of the planet.

And, still, despite all the triumphs the mountain has provided since Hillary and his Nepalese partner, Tenzing Norgay, became the first to reach its 29,029-foot (8,848-meter) summit on May 29, 1953, Everest remains frigidly, proudly inhospitable. Even deadly.

Earlier in May 2019, several climbers died on Everest's slopes, after crowds of people became stuck in a queue leading to the summit. Climber Nirmal Purja posted a picture on Instagram that showed a literal human traffic jam of climbers one on an exposed ridge, adding that there were about 320 people waiting in line near the top of the mountain in an area known as the "death zone."

Estimates vary, but at least 250 people have died on Everest since it was first summited in 1953. Falls, avalanches, altitude sickness. Exposure, heart attacks, sheer exhaustion. You can die in many ways on Everest.

Still, the lure of the world's highest peak — think 20 Empire State Buildings stacked on top of each other, then wrap them in snow and ice and bitter cold, with winds and storms that make it difficult to even move — is too strong for many to resist.

"For groups of people who are interested in the sport, it's gonna be exciting as much as ever," says Gordon Janow, who has been setting up expeditions to Everest and other mountains throughout the world for more than 25 years as the director of programs at Seattle-based Alpine Ascents International. "Imagine yourself starting out, you go on a climb of Mount Rainier out here, and you say, 'Gosh, I just love doing this.' Obviously, something like Everest suddenly becomes a goal or a dream."

Achieving that dream, despite Everest's risks, is much easier now than it was when Hillary and Norgay made history. The simple knowledge of how to go about the task has grown tremendously as thousands have summited the formidable mountain.

The routes, for the most part, are so well-known and often crowded now that, during the climbing season (which begins in April or May), wannabe summiteers have to form lines in some areas of the mountain, like what happened in May. Helicopters are used to scout possible new routes. Camps are equipped with WiFi and staffed with medical personnel. Cell phone service is available on Everest, even at the summit.

Hillary, a New Zealand native, and Norgay, a Tibetan-born Sherpa who wound up in a part of Nepal famed for its mountain guides, wore wool clothing, or wool-cotton blends with some nylon, along with lightweight boots designed specifically for the British-funded expedition. But that was nothing compared to today's climbing outfits, which are lighter, keep the wearer warmer (with down and other materials) and offer far better protection from the unforgiving elements.

The climbing equipment, too, has changed drastically in the past six decades. Hillary and Norgay had classic wood-handled ice axes made in France, according to National Geographic. Now, climbers carry strong steel axe heads on lighter, aluminum handles. Tents were canvas, lined with a nylon-type material in 1953 and held up by piano wire and poles in a classic A-shaped frame. These days, rounded nylon tents with aluminum poles, designed to withstand howling winds, are the norm.

Oxygen bottles are lighter, and the delivery system is better. Polarized lenses in state-of-the-art goggles protect eyes against possible snow blindness. Even the food is improved. Protein bars, sports drinks and trail mix are a long way from fish in tin cans and weak tea.

It still takes weeks — in 1953, seven weeks, and roughly around that now, depending on weather — to acclimatize and make the trek. It's still expensive, too. The average cost for an expedition to Everest in 2017 cost a single climber upward of $45,000. That can vary widely, though, depending on how custom the support is. Typically, the average price includes transportation, food, base camp tents, Sherpa support and supplemental oxygen. Gear costs more.

All in all, though, climbing Everest today beats Everest in Hillary's day hands down.

"From a day-in and day-out, it's gonna be an easier deal today," Janow says.

That doesn't mean that ascending to the top of the world is in any way easy, as many hundreds have discovered throughout the years. No matter how well-prepared a climber may be, no matter how well-equipped, everyone knows that Everest still can be dangerous. It can kill.

"I was scared many times on Everest," Hillary said in a 1996 interview. "But this is all part of the challenge."

NOW THAT'S INTERESTING
Nowadays, those lucky enough to get to the summit can take a selfie from the top. But the only picture of the initial summit is of Norgay; Hillary was the photographer. When Norgay offered to switch spots, the famously self-effacing Hillary declined. He later said that, with their oxygen supply dwindling, he simply had no time to show Norgay how to use the camera.