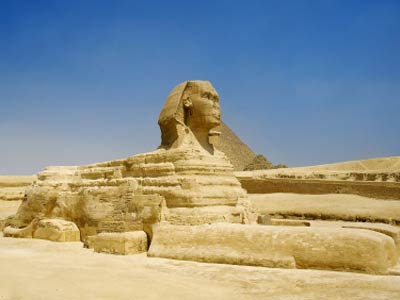 The Great Sphinx of Giza depicts the face of King Khafre.
©iStockphoto/Serge_Vero

After seizing the reins of power in France and storming through Italy, Napoleon set his sights on a new continent: Africa. French troops invaded the shores at Alexandria and headed into Cairo in the summer of 1798. But intense heat and unwelcoming locals didn't make for a pleasant stay. Soldiers were restless to return home and complained of incessant boredom. To pass the time, some scaled the nearby pyramids at Giza. From that vantage point, they would've had a bird's-eye view of the head of the Great Sphinx, which at that time was buried to its neck in sand.

Those same listless French soldiers have shouldered the blame for the Sphinx's missing nose. Some inventive historians imagined the men treating the pale limestone face as an oversized target for artillery practice. But sketches by artist and architect Frederick Lewis Norden from 1737 -- more than 50 years before Napoleon's arrival -- show the Sphinx without a nose, exonerating the French soldiers [source: Sweeney]. Furthermore, the nose had probably been missing for a handful of centuries [source: Dwyer].

The disappearance of the Sphinx's nose is just one of many puzzles surrounding the massive statue. The ghostly stone head costumed with the traditional nemes headdress of the pharaohs rises 65 feet (20 meters) above the ground. It rests atop the body and haunches of a lion whose limbs stretch out along 187 feet (57 meters) near the entrance of the Giza Necropolis. The necropolis, consisting of the Great Sphinx, Great Pyramids and minor burial chambers and temples, was constructed by pharaohs Khufu, Khafre and Menkaure from the Old Kingdom's Fourth Dynasty (2560 to 2450 B.C.).

Ironically, the identity of that somber, worn face is one of the least debated aspects of the Great Sphinx. Mainstream Egyptologists agree that it belongs to pharaoh Khafre (also known as Chephren). More than 4,500 years ago in peak condition, the Great Sphinx, painted and adorned with the long, braided beard characteristic of the divinities and the deceased, bore a close physical resemblance to Khafre. The statue also is constructed from the same bedrock as Khafre's burial pyramid and nearly perfectly aligned with it [source: National Geographic].

But the riddle of the Great Sphinx of Giza is far from solved -- at least according to some. Since its modern excavation by Emile Baraize beginning in 1926, it seems that Khafre's monument has raised more questions than it has answered.

Mysteries of the Great Sphinx

Between the paws of the Sphinx stands the Dream Stela of King Thutmose IV, New Kingdom era ruler from 1400 to 1390 B.C. The tablet recounts the tale of young Thutmose, who fell asleep one day in the shadow of the Great Sphinx. In a dream, the Sphinx appeared to Thutmose as the sun god, Horus, and asked for protection from the encroaching sands. In exchange, the Sphinx promised Thutmose the Egyptian crown. Both held up their ends of the bargain, and the future pharaoh completed one of the first ancient restorations of the Great Sphinx.

Over time, the wind and sand of the Giza plateau mistreated the Sphinx, contorting its colossal face into a frightening, otherworldly visage. In fact, the Arabic name for the Sphinx is Abu-Hol, or Father of Terror.

This mystical nature of the Great Sphinx has attracted fringe theories about whether the creature has a more supernatural origin -- including a possible link to the Lost City of Atlantis. The Egypt-Atlantis connection has been around since Plato first wrote about the utopian civilization. Around the turn of the 20th century, American psychic Edgar Allan Cayce said he had a vision about a chamber beneath the Sphinx that held the secret to the whereabouts of Atlantis. Cayce, who died in 1945, claimed this chamber would be discovered in 1998 [source: Jehl].

No one's found the Atlantis chamber, but geologists and amateur historians haven't abandoned the notion by challenging the widely accepted age of the Sphinx. In 1996, a pair of controversial Egyptologists claimed that rain, not just wind and sand, caused significant erosion of the Sphinx; geologists backed up their claim. Considering that the region's moist prehistoric climate shifted to current arid conditions around 4,000 B.C., rain damage would indicate that the Sphinx was built well before Khafre's time.

The disparate style of the Great Sphinx compared to surrounding structures and the disproportionate size ratio of the head to the body have also led researchers to question the relic's age [source: Daily Mail]. If their theories are correct, a highly advanced society predated the Egyptians and disappeared from history without a trace.

Zahi Hawass, secretary general of Egypt's Supreme Council of Antiquities, regards such conjectures as sensationalist nonsense. No other artifacts from the Giza Necropolis predate ancient Egypt, and seismic readings don't reveal hidden cavities below the Sphinx. For Hawass and other archaeologists, the only riddle of the Sphinx left unsolved is how to protect it against the literal sands of time.

The Riddle of the Sphinx

In Greek mythology, the winged female sphinx of Boeotian Thebes presented passersby with a riddle from the Muses that would end in death for a wrong answer: What single creature is four-footed, two-footed and then three-footed?

Oedipus answered the sphinx correctly: man. Humans first crawl on all fours, learn to walk on two feet and then walk with canes (a third leg) in old age. The correct reply caused the menacing sphinx to kill herself.