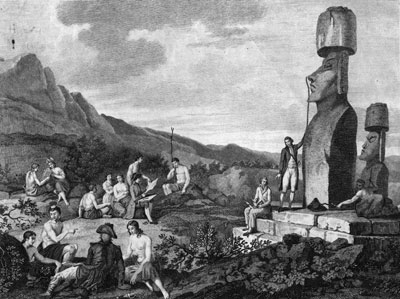 In this circa 1790 sketch, European explorers measure and record details of the moai.
Hulton Archive/Getty Images

The Birdman Cult was beginning to rebuild the culture and population of Easter Island. Petroglyphs of birds became far more numerous than the haunting carvings of ghosts, which a doomed civilization had made in prediction of their fate. Crops like the sweet potato were starting to flourish once again, and it seemed as though life on Easter Island might be resuscitated.

But when Westerners arrived, they brought a host of new diseases and customs. The Dutch came first on April 5, 1722; the Spanish in 1772 and James Cook's British crew followed on March 13, 1774 [source: Fischer]. When the Spanish landed on Easter Island, it was with the intent to secure it for Spain.

The Rapanui observed the Spaniards' strange practice of writing, and the chief w­as even given pen and paper with which to write. This first attempt at writing was actually manipulation -- the Rapanui chief's uncertain characters qualified as the official signature that turned the island over to Spain.

­Westerners introd­uced a number of innovations to the island, most of them less pleasant than the art of writing. In addition to nasty stowaways like cockroaches and rats that infiltrated the island, voyagers also brought disease. By the turn of the century, the Rapanui population dwindled to 110 people.

When missionaries came, the Rapanui embraced their Christian God. For the salvation and prosperity these missionaries promised, the Rapanui relinquished their culture -- the tattoos, the Rongorongo and any tenuous threads to the moai. By the 1830s, the last moai fell. The Rapanui turned to ranching and learned new ways to use their land. In 1888, Chile annexed Easter Island [source: McCall].

Even though the Spanish played a bad hand against the Rapanui, the act of writing inspired the islanders to create their own writing system and alphabet. The Rapanui wrote from left to right in characters that contained a complete idea or word. The chief used writing to regain control over the Birdman cult. Most of the records are about the necessity of procreation on the island -- population was at an all-time low. Tablets and battle staffs upon which Rongorongo was written were destroyed after the infusion of Western culture in the island. Because there are so few records, the language has been called indecipherable -- only 25 records exist and are located in museums around the world.