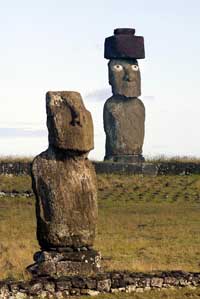 The moai are Easter Island's most recognizable feature. The moai on the right has been restored after having been torn down and its eyes gouged out.
Martin Bernetti/AFP/Getty Images

Moai aren't exclusive to Easter Island. You can see structures like them in Tahiti and Hawaii -- but nowhere else are they so staggering in size, number and craftsmanship [source: Discovery Channel].

Creating the moai was an expression of piety: No other work of art embodied mana quite like these giants. The Rapanui started building them around 1200 A.D. These statues were built on a fairly modest scale -- the towering, massive moai would come around 1600. Like a craftsmen guild, moai artisans learned special processes for turning out these gods. The pits of the volcano Rano Raraku were the artists' workshop. Here were immeasurable amounts of compacted volcanic ash, a porous, lightweight rock. The rock was hard, malleable and naturally tinted in hues of ochre and orange.

While each moai is believed to have represented a distinct ancestor, they all bear a similar appearance due to their creation process. Artists began by tracing the outline of the moai in the rock. Once this blueprint was complete, they would chisel the rock away so that only the rough moai and a flat base -- the keel -- remained.

The careful precision that went into crafting the moai was equaled by the deliberate care with which they were moved from the volcano to their ahu, platforms on the island's perimeter. Perhaps they were intended to guard the coastline. Their faces looked inward toward the island with watchful stone eyes -- some ornamented with obsidian and coral.

How the moai were moved is a mystery, but prevailing theories explain the Rapanui's methodology. Once the statue was finished, it was severed from its keel and guided down the volcano with ropes. Then, the moai was loaded onto logs to be rolled to its ahu. Whether the statue was loaded horizontally or vertically is a topic of debate. Archaeologist Jo Anne von Tilburg theorizes that the moai were rolled along a double layer of logs: one layer was a horizontal platform that held the statue stable, and the second layer (perpendicular to the first) would have done the actual rolling [source: Mysterious Places]. The Rapanui likely lubricated the logs with palm oil to aid the rolling process.

Trees were cleared to make roads for moai transport. It may have taken up to a few weeks and the efforts of nearly ­70 men to roll the statues to their ahu. Lastly, moai were lifted using ropes as pulleys and logs as levers and hoisted into place. Their ahu were works of art as well as feats of engineering. No matter how elaborately carved and decorated the ahu, its primary purpose was to support the weight of its giant.­

The Rapanui tirelessly created and transported their beloved moai to the coast. But then production suddenly ceased. In the next section, we'll learn why.

Preeminent Easter Island scholar Thor Heyerdahl has used this modest root vegetable as evidence that Easter Islanders descended from South America, not Polynesia. He theorized that because the sweet potato is indigenous to South America, and not native to Polynesia, it was likelier that the potato-bearing settlers came from the former region. Other evidence suggests that the sweet potato may have been transported to Polynesia from south Asia, by birds or even by ocean waters [source: Island Heritage].