The Dark Side of Dubai 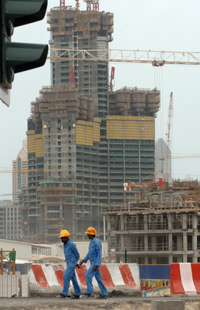 Workers usually enter the UAE already deep in debt, having paid recruiters in their own countries large fees for jobs, visas and plane tickets. When they arrive in Dubai, employers often seize the migrants' passports and withhold two months' pay as security.

When paychecks finally arrive, they're dismally low. While the average per capita income in the UAE is the equivalent of $2,106 per month, the average migrant worker receives only $175 a month and often lives in a labor camp far outside of town. To prevent the in-demand workers from competing for better salaries, construction companies often have employees sign contracts pledging exclusivity to one firm for at least two years.­

Building skyscrapers and artificial islands is also dangerous work. In 2004, the UAE government listed only 34 work-site deaths, but foreign embassies reported 880 [source: Human Rights Watch]. Although the UAE does have federal labor laws, contractors who mistreat workers or withhold wages are rarely punished.

­The involuntary servitude of many construction workers, combined with a brisk business in commercial sexual exploitation, puts the UAE on the U.S. Department of State's Tier 2 Watch List for human trafficking. While men find themselves trapped in debt bondage, women recruited as domestic workers or secretaries often are forced into involuntary servitude or prostitution. The UAE also serves as a transfer point for women trafficked for labor to Oman and Sudan and men to Iraq.

Although the UAE passed an anti-trafficking law in December 2006, it has yet to prosecute offenders. The government also continues to detain and deport trafficking victims who have committed crimes while in servitude.

To learn more about Dubai and Dubai's attractions, take a look at the links below.

Emiraties love sports, especially luxury sports like falconry and horse racing. The Dubai World Cup has the distinction of being the world's richest horse race (naturally). The sixth race of the event has a prize of $6 million, while the five preceding races have a combined purse of $15 million. Hotel parties lead up to the Cup, and fashion shows and raffles of Ferraris and Rolls Royces keep attendees entertained.