Browse the article Why is the world's largest artificial island in the shape of a palm tree? 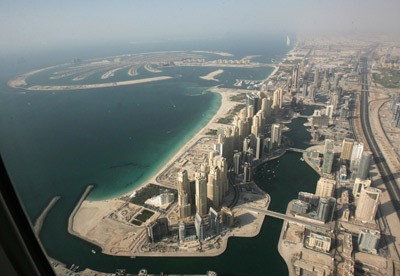 You­ can see the flattened palms­ from space­. Their logo-like shapes span Dubai's coast­line, providing prime gulf real estate to interested millionaires. Buyers who want a little more space can even purchase their own private islet on an archipelago shaped like a map of the world.

Since the 198­0s, Dubai has exploded to the forefront of global business and tourism. The ruler of Dubai, Sheik Mohammed bin Rashid al Maktoum, pursues development as a way to eliminate the emirate's reliance on dwindling oil supplies.

But Dubai's geographical setting limits development: It's a small desert state with a coastline only 37 miles long. High-rises and hotels gobbled up Dubai's Persian Gulf coast in the 1990s, creating a wall of buildings.

In 1993, construction began on Dubai's first man-made island, the future home of the Burj Al Arab, Dubai's famed seven-star hotel. The striking structure stands out from the surrounding skyscrapers, and its location 919 feet out into the sea keeps its shadow from interfering with a nearby beach r­esort. The Burj Al Arab's offshore success contributed to the formulation of an even grande­r plan: enormous artificial islands.

­Sheik Mohammed first sketched the palm design as a way to maximize beachfront property. The longest frond on the smallest island spans nearly a mile of sea and contains property on both sides.

The state-owned company Nakheel developed plans for three palm islands and the multi-islet World. The smallest palm, Palm Jumeirah, accepted its first residents in the summer of 2007 -- David Beckham owns a plot. The Palm Jebel Ali, a medium-size island, is structurally complete. And the largest island, the Palm Deira, is still undergoing sea reclamation.

In the next section, we'll learn how the palms were built.­­­

Your favorite country or state is for sale -- and it'll only cost you a cool $7 million to $35 million. Three hundred islets make up the World, an archipelago in the shape of a map. If your favorite spot didn't make the cut, Nakheel can arrange a special country construction. Some countries, however, such as Israel, Palestine and Northern Ireland are conspicuously absent. The World, in part because of its steep price tag, is not selling as well as palm property is. Nakheel sells only to buyers who promise low-density growth. 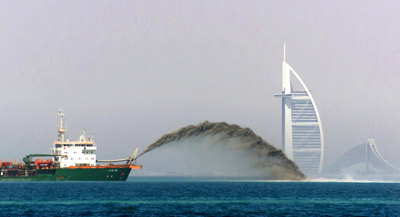 Construction on the palm islands began in 2001. Divers surveyed the seabed and worke­rs constructed a crescent-shaped breakwater from blasted mountain rock. The Crescent of Palm Jumeirah stands a little more than 13 feet above low tide sea level and sits in 34 feet of water at its deepest point.

Sand, covered by an erosion-preventing water-permeable geo-textile, makes up the breakwater's lowest layer. One-ton rocks cover the sand, and two layers of large rocks weighing up to six tons each cap the structure. A "toe" placed by a floating crane sits inside the Crescent. The breakwater also has two 328-foot openings on each side to eliminate stagnation in the 16 narrow, deep channels. These gaps allow water to completely circulate every 13 days.

­Although five workers were swept away­ by a wave and one drowned, the designers at Nakheel believe the breakwater will protect the palm island from average gulf weather and even an enormous storm. They even suggest that villas barely 10 feet above sea level will be safe from the rising seas of global warming.

The palm islands themselves are constructed from sand dredged from the sea floor. Palm Jumeirah is made from 3,257,212,970.389 cubic feet of ocean sand vibro-compacted into place [source: The Palm Jumeirah]. Vibro-compaction increases the density of loose sand by saturating it with jets of water and vibrating it with probes [source: TerraSystems].

To get the complex shape just right, designers and contractors use Differential Global Positioning Systems (DGPS) to plot the palm and ensure the sand placement within 0.39 of an inch.

Palm Jumeirah is already packed with villas and hotels, with some early buyers complaining that the plots are more closely spaced than they were led to believe. Buyers are a mixture of long-term residents, vacationers and speculators hoping to cash in on skyrocketing prices. When the island is complete, Nakheel expects 120,000 residents and workers plus as many as 20,000 tourists a day. Construction workers lived on the fronds and in anchored cruise ships while building the island.

­To facilitate tourism and make life easier for residents, the six-lane Sub-Sea Tunnel connects Palm Jumeirah to the mainland. Workers used a dam to drain the area and excavate the seabed before rereleasing the water. Developers have plans for a four-stop monorail that will race the length of the palm.

To learn more about the Palm Islands and Dubai, look over the links on the next page.

The Palms and the Environment

Although the development company, Nakheel, took steps to minimize the environmental effects of construction by transporting fish and marine animals outside of the palms' breakwaters, the islands have still harmed the area's marine environment. Rocks and sand buried oyster beds and coral reefs and altered currents eroded the mainland shore. Meanwhile, the owners of once-desirable shore properties complain that the islands destroy their view.