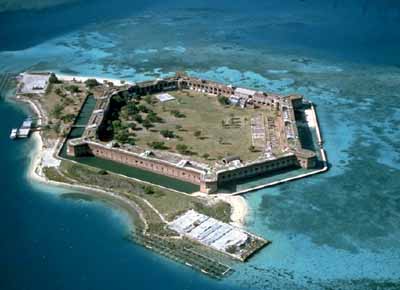 Dry Tortugas is one of the most remote national parks in the lower 48 states. Set in the Gulf of Mexico about 70 miles west of Key West, Florida, the park protects 100 square nautical miles of sea, sand, and coral reefs around seven tiny islands known as the Dry Tortugas. Visitors may reach the park only by boat or seaplane and must bring all necessary food, water, and shelter with them.

Other services: Boat pier and campround

Visiting Dry Tortugas National Park
Ponce de Leon sailed through the waters off the southwestern coast of Florida in 1513 and, noting the abundance of sea turtles, named them Las Tortugas ("the turtles"). They later became known as the Dry Tortugas, owing to the lack of fresh water.

The centerpiece of the park is Fort Jefferson, the largest brick and masonry structure in the Western Hemisphere and the biggest fort still standing from the 19th century. From the standpoint of natural history, the park is important to the region in that it protects seven coral islands -- the Dry Tortugas, the most pristine coral reef in the continental United States.

The Dry Tortugas islands are a wonderland of warm and azure water, white sandy beaches, and coral reefs brimming with life. Snorkeling, scuba diving, fishing, and bird-watching are the main pursuits there. On the next page, read some tips for sightseeing at Dry Tortugas.

Travelers to Dry Tortugas National Park are drawn in by the inviting beaches and warm waters. Opportunities abound for even a casual visitor to don a diving mask and snorkel to explore the rainbow world of coral reefs under the waves.

Built up over hundreds of thousands of years by tiny calcium-producing polyps, coral reefs attract a stunning variety of sea life. Among the many colorful species one is likely to see are blue-and-yellow-striped grunts, red or turquoise parrotfish, flat angelfish, trumpetfish, and prowling sharks and barracudas.  These reefs include substantial beds of turtle grass, as well as hard corals -- brain, elkhorn, and fan.

Staghorn and elk coral reach for the sunlight, sea fans wave gracefully, green turtles and loggerheads paddle lazily through the waves, and schools of brilliant blue tangs dart safely out of reach. Experienced divers may also explore more than a dozen shipwrecks within the boundaries of the park, some dating back to the late seventeenth century.

There is an abundance of wildlife above the surface, too. Situated on a main flyway between North and South America, the Tortugas are a major stopover for migratory birds, some of which travel as far north as Canada and even Alaska. Dozens of species may be seen in a single day in the park during the height of the spring and fall migrations.

One of the most dramatic events in the park occurs in February, when 100,000 sooty terns nest on Bush Key. Females lay their eggs on the sand and take turns protecting them with the males. The birds stay in the Tortugas until the young are old enough to migrate on their own. Although Bush Key is closed to visitors during the nesting season, the rookery may be observed from the fort on neighboring Garden Key.

Sea turtles also deposit eggs on the islands. As many as two or three times each year, females haul themselves onto the beach, dig a hole in the sand with their powerful flippers, and lay about a hundred golf-ball-sized eggs. Only a fraction of the hatchlings survive; most are eaten by other animals. The survivors return to the sea and take their place in the cycle of life that keeps this fragile ecosystem healthy.


The wildlife wonderland that now is Dry Tortugas National Park was undiscovered until the arrival of Ponce de Leon in the 16th century. Subsequently, the islands housed pirates, who claimed them as a base for their nefarious adventures. After Florida was acquired, the U.S. government began the construction of Fort Jefferson -- the ruins of which span most of Garden Key. On the next page, learn more about history of the Dry Tortugas.

The History of Dry Tortugas

Dry Tortugas National Park houses one of the largest coastal forts in the world. In 1840s, the United States government chose one of the islands -- Garden Key -- as the site of a massive fortification (the largest coastal fort in the country) designed to control access to the Gulf of Mexico. Construction of Fort Jefferson was begun in 1846 and continued for 30 years but was never completed.


During the Civil War, it was used as a military prison by the Union Army. Among its most infamous inmates was Samuel Mudd, the doctor who set the broken leg of John Wilkes Booth after the assassination of President Abraham Lincoln. The fort was abandoned in 1874, and the island and surrounding area were declared a wildlife refuge in 1908.


The fort's brick walls -- some of them eight feet thick and 50 feet high -- and the ruins of several buildings may be viewed on a self-guiding tour. Garden Key also offers a small visitor center, a boat pier, and the park's only campground.

Of course, there is much more to do at Dry Tortugas National Park than tour Fort Jefferson. The park is a favorite of divers and snorkelers, as well as beachcombers. In fact, the celebrated author and sports enthusiast Ernest Hemingway once fished for Atlantic marlin in these seas. Who says you have to travel to Micronesia to see a pristine reef? A short boat ride from the easily accessible islands of Key West will bring you to a reef system that is just as spectacular.