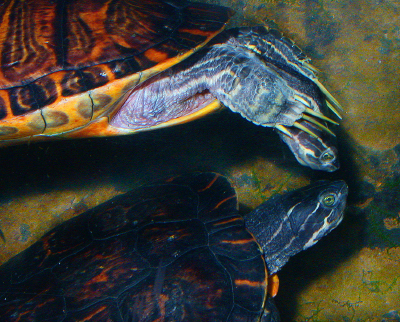 River Cooter Turtles are among the highlights at the Tennessee Aquarium, the largest freshwater aquarium in the world.

Most aquariums showcase the varied marine animals that inhabit the planet's vast oceans. But the spectacular Tennessee Aquarium in Chattanooga concentrates on creatures found in and around the earth's rivers, swamps, ponds, and lakes. It is the biggest freshwater aquarium in the world.

One section of the aquarium follows the course of the Tennessee River all the way from an Appalachian high country stream down through the steamy Mississippi Delta and out into the Gulf of Mexico, where freshwater and saltwater mix. Along the way, visitors see thousands of animals that live above and below the water's surface, such as playful river otters, speckled salamanders, alligators, a massive 80-pound catfish, and vicious-looking moray eels.

Visitors can also wander through the world's largest collection of freshwater turtles to see the unusual pancake tortoise and a nursery containing adorable baby turtles. The Rivers of the World gallery showcases creatures from the Amazon, Congo, St. Lawrence, Volga, and Fly rivers as well as from tropical Eurasian waters. Three full exhibits are devoted to the Amazon, featuring fish, frogs, and lizards from the region, as well as the feared red-bellied piranhas and gigantic anacondas.