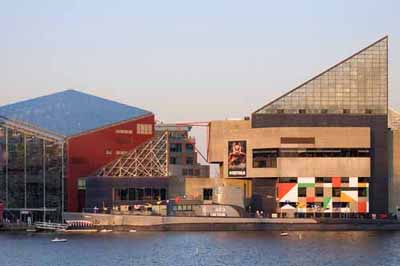 The National Aquarium, on the end of Baltimore's Pier 3, anchors Baltimore's Inner Harbor. The aquarium is considered the nation's greatest and is certainly entertaining and thought provoking. It is huge, with more than 10,500 fish and other creatures on display. You'll rave about the aquarium's exhibitions -- not to be missed are its 1,200-seat Marine Mammal Pavilion dolphin show on Pier 4 and the Wings in the Water display, which features small sharks, turtles, and dozens of gliding, pinwheeling stingrays that look as if they're dancing on air.

The aquarium has five levels, with more happening on each than at a three-ring circus. The Atlantic Coral Reef exhibit is a 335,000-gallon tank that surrounds you with hundreds of tropical fish swimming around the world's most accurate fabricated coral reef. Step into the South American Rain Forest exhibit, a re-creation of an Amazon River tributary that runs the length of a 57-foot-long acrylic wall with giant river turtles, tropical fish, and dwarf caimans. Or get an up-close look at large sharks in the Open Ocean exhibit, a 225,000 gallon ring-shape tank. Interactive computer stations explain the exhibits.

Family Vacations: Learn about hundreds of family vacations in destinations all over North America.Maryland State Guide: Learn about Mobil Travel Guide-rated hotels and restaurants in Maryland, as well as other recreational activities.Scenic Drives: For those who think that getting there is half the fun, we have compiled more than 100 of the most scenic drives throughout the country.