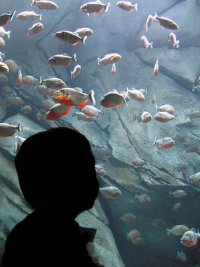 The Georgia Aquarium is a perfect destination for both children and adults alike.

Ralph and Norton are definitely the biggest stars of the new Georgia Aquarium in Atlanta. At nearly 20 feet long and growing, these two enormous whale sharks are members of the largest fish species on Earth. They roam the waters of a six-million-gallon tank they share with thousands of other fish, including sawfish, red snappers, stingrays, and hammerhead sharks.

The aquarium features 100,000 animals representing more than 500 species in 60 separate habitats and has several major viewing galleries, each arranged around a theme. The Cold Water Quest exhibit is home to beluga whales Nico and Gasper, who were rescued from a Mexico City amusement park. They are being rehabilitated and will live with several other belugas to form a breeding program.

The Georgia Explorer section focuses on Georgia's coast, with touch tanks full of stingrays, horseshoe crabs, sea stars, and shrimp, as well as a children's playground.

In the River Scout Gallery, visitors are treated to a video of a river that appears to be running overhead. It teems with fish found in the rivers of Africa, South America, Asia, and the state of Georgia. Several Asian small-clawed otters play in an adjacent exhibit.