Browse the article What's the Worst Seat on the Plane? 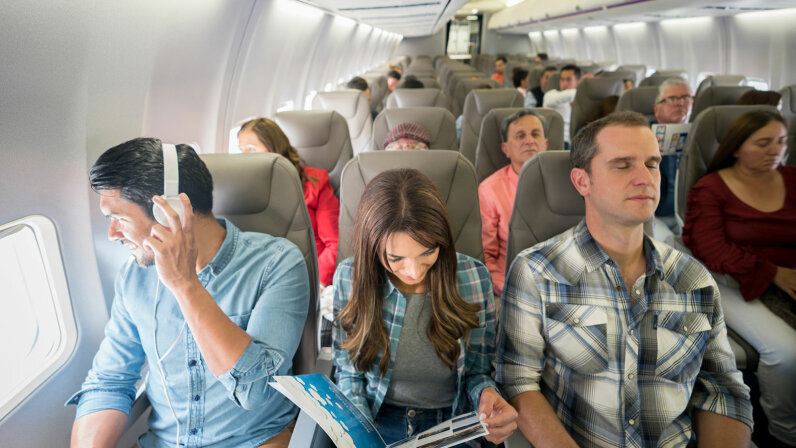 Although it might seem like almost any seat in economy is bad, some are actually worse than others. Hispanolistic/Getty Images

What's the worst seat on a commercial airliner? If you're flying in economy class, your gut answer might be, "All of them." As airlines continually cram more seats onto their planes in an effort to maximize profits, customers literally feel the pinch. Seat space is limited, knees are crunched, elbows become inconveniences, and reclining your seat may get you into trouble with the person behind you.

But in this hellish scenario, some seats really are worse than others. For instance, the unfortunate travelers at the very rear of the craft are probably swirling through several of Dante's circles of hell.

Why the rear seats? Let us count the ways.

Experts point out that in the very last row, the seats don't fully recline (if they recline at all). There's also a very good chance that you won't even have a window, meaning you can't stare at the clouds while you ponder your poor life choices.

But that's not all.

At the very back of the plane, you're almost certainly near a lavatory. That means a line of frantic people will queue up next to you. Then, you'll be subjected to the constant sounds of toilet flushing and the accompanying smells that waft through the cabin.

On most planes, the galley is located at the rear. That means you're dealing with flight attendants milling about, chatting, and often warming up various varieties of airline gruel, the odors of which may revoltingly mingle with scents from the lavatory.

If that isn't enough, turbulence often feels more violent at the back of the plane.

And if you have to make a tight connection once you're on the ground? You may need to ask the flight attendants to see if they can escort you quickly to the front of the plane, or you'll lose vital minutes scrambling your way out.

Another seat that most people seem to agree is the worst? The middle seat in just about any row. That's because you're two impolite seatmates away from spending the entire flight dreaming of death – yours or theirs. And you have neither the ease of movement of an aisle seat nor the view of a window seat.

Put all this together and it seems that the middle seat in the last row of the plane is the very worst seat of all.

But there's still room to play devil's advocate for the last row. Travel writer John Burfitt points out that no one can spend the entire flight kicking you in the back. And if you get the "window" seat, you might well be able to tuck your head against the corner for naps. It's also much less likely that you'll get bumped by the infernal drink cart.

Better yet? With many people actively avoiding the very back of the plane, you just may have the row all to yourself, so you might be able to stretch out.

Of course, airline executives already know which seats are better, and they may charge extra fees for seat selection. Sometimes, the airlines will even disguise the fact that you're paying for preferred seating unless you opt out, meaning you have to be very careful when booking your ticket.

If you want to be extra-vigilant, before you select a seat, consult a website like SeatGuru that has seating maps for planes on every major airline and has the worst seats highlighted in red.

Now That's Interesting
Comfort is one thing, safety is another. Some research shows that in plane crashes, rear middle seats tend to offer the best chance for survival. However, before you rush to book that back seat, realize that other studies dispute those findings. But one fact is inarguable – booking direct flights minimizes the number of times you'll take off and land, and those are the moments when most crashes occur.