Getting Sold Out Tickets 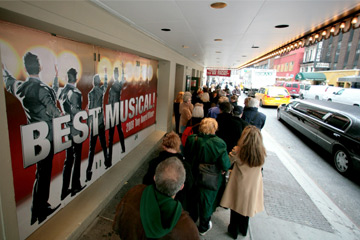 If you're buying your theater tickets while traveling, then you're probably getting them at the last minute. What if there are no tickets available? If a show is popular, there's a good chance that seats will be scarce and you could be turned away empty handed by the box office or the Web site where you planned to buy tickets. Is it possible to get sold out tickets?

Yes, but it's going to take some initiative on your part and it may cost you more money than you intended to pay. It's common for people to sell tickets for popular shows on Web sites like eBay and Craigslist, but if the show is sold out the price is likely to be high. There's also some risk that the tickets will be counterfeit or otherwise unusable. For instance, an unscrupulous seller could report the tickets as lost or stolen and get new ones, causing the theater to cancel the old ones before you have a chance to use them. Fortunately, eBay sellers have a feedback rating that will give you some idea of how reliable they are, but no such ratings exist on Craigslist. The principle of caveat emptor is very much in effect here -- let the buyer beware.

If you don't want to take the risk of buying tickets from an individual, you might be better off trying StubHub, a Web site that brokers deals between tickets sellers and buyers. StubHub guarantees the tickets that you buy through its service, so you won't find yourself out several hundred dollars if the tickets you purchase for your family turn out to be bogus. And even though the tickets are guaranteed by StubHub, you could still find yourself turned away by the theater. The chances of this are slight, but it's something you may want to take into account.

If all of this makes you nervous, consider getting in the standby line. This is a special service that many theaters offer for sold-out performances. If ticketholders cancel at the last minute, the theater will resell the tickets just before the show. Visitors in the standby line can purchase these tickets and can often get terrific tickets for popular shows at regular theater prices rather than the inflated prices imposed by some resellers. Some theaters have a policy called lottery rush where a certain number of tickets to sold-out performances are given out by random drawing at showtime. If you're feeling lucky, go ahead and try for these lottery tickets. Just be sure to check with the theater first, because lottery rush tickets are sometimes restricted to students. Either way, you'll still have to pay for the tickets, but they may be discounted.

And if even standby tickets aren't available, as a last resort you may be able to get standing-room-only (SRO) admission. As the name implies, you won't have a seat, but many theaters allow last minute ticket buyers to stand in the back of the theater or in the aisles for sold-out performances. Contact the theater in advance to see if SRO tickets are available. In some cases, standing room may be restricted to students or other special groups. If standing room is available (and if your family has the stamina for it), you may be able to attend shows that you otherwise wouldn't have been able to see.

For more information about theatre tickets and other related topics, follow the links below.