Best Times to See a Show 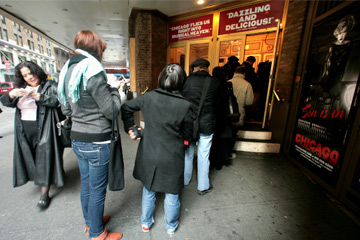 What are the best times to see a show? And when are tickets relatively easy to get? If you want to see a play or a musical, the performances are traditionally at 7 or 8 in the evening. Not surprisingly, performances during the week can be easier to get tickets for than performances on the weekend, and they're often less expensive during the week, too. Most theaters also have matinee performances, usually around 2 p.m. on Thursdays, Saturdays and Sundays. If this appeals to you, check the theater listings to find out when there's a matinee for the show you'd like to see.

Theaters have a longstanding tradition of being dark on Mondays -- that is, theaters tend to close on Mondays to give the actors and crew a day off. This is because Monday is the day when people are going back to work or school and audiences tend to be smallest. However, this tradition is changing, and in recent years some theaters have chosen to go dark on other days of the week, usually Sundays. Once again, check the theater listings to be sure there's a show on the day you plan to go.

Some shows run for long periods of time, often for years on end. For example, the musical "The Phantom of the Opera" has been running at the Majestic Theater on Broadway since January of 1988. Others have limited runs of just a few weeks. So the question is this: Is there a point in a show's run when you should plan to go? For instance, should you go to see a show when it first opens or wait until later? That's not an easy question to answer. If a show is a hit, the early performances may be sold out and tickets difficult to come by. Waiting until later may make it easier to get tickets, especially if you buy them well in advance. But this is also risky because the show may close before you have a chance to see it. Most shows have a preview period of several weeks before the official opening. It can be easier (and sometimes cheaper) to get tickets for a preview because word of mouth about the show hasn't gotten around yet. There's some risk that early previews may be a bit rough because the cast and crew haven't fully learned the show yet, but in most cases previews are every bit as polished as "real" performances.

If you wait too long to see a show, the original cast may have moved on to other projects and have been replaced by lesser-known performers. This isn't necessarily a bad thing. The replacement casts are sometimes better than the originals and often feature well-known stars. Still, if you're determined to see a certain performer in a show you should move quickly to catch them before they're gone.

What if you're determined to see a show while you're in town but the box office tells you that it's completely sold out? Well, the good news is there are still ways to get tickets, though it can be expensive and sometimes risky. We'll talk about that on the next page.