When is the cheapest time to fly? 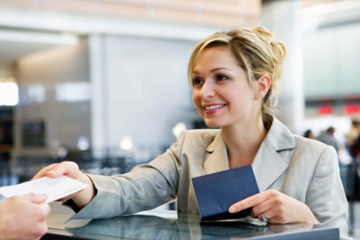 Knowing when to buy your ticket may save you money and help you smile when you travel.
Jupiter Images/Comstock/Thinkstock

So, you're planning a vacation, but like so many who have suffered through recent economic misery, you don't have a bottomless wallet. Well, you're in luck. You've come to the right place for some help finding cheap airfare.

The cost of travel is going up, and it's not just about the expense of buying a ticket. With airlines struggling to operate due to rising fuel prices and bad management over the past several years, passengers are bearing the brunt of increased costs associated with air travel. Airlines used to serve complimentary soft drinks and meals, but have now turned to charging for such amenities.

In addition, even though airlines have been charging for baggage for some time now, airlines such as Spirit are starting to charge for carry-ons [source: Croghan]. But not every carrier is willing to go to such lengths to make money. That's why you can avoid these costs by packing light and not delving into such luxuries as dining aboard the once-friendly skies.

If you really want to save money, you'll have to take these expenses into consideration and shop around for reasonable fares. Airfare can more than double in cost, depending on when you fly. It helps to be flexible.

This article will give you the tools you need to plan your vacation efficiently, starting with the airfare. Let's begin with some empirical data. See what's revealed after crunching a bunch of numbers for flights headed to Cancun, Mexico.

When to Find the Best Price on Airline Tickets 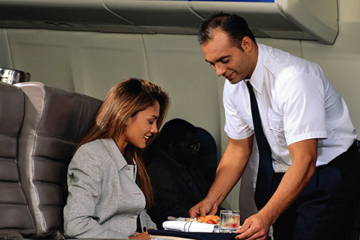 Once you've got a cheap airfare, you can save more by skipping in-flight meals.
Jack Hollingsworth/Photodisc/Getty Images

Web sites designed to take the guesswork out of travel are a great place to look for airfare deals. Trend Tracker is a tool created by Expedia that allows you to enter your intended departure time and destination to find the lowest airfare prices over a two-year period.

For example, if you plug in a departure city, such as Atlanta, and select a destination, say, Cancun, Mexico, you can get an idea of how much it costs to fly at different times of the year. After trying the same procedure with departure cities across America, we learned something important: It's expensive to fly to Cancun in December. However, January and November seem to be great times to fly. Additionally, whenever the data revealed November as being the average low, the dates coincided with the Thanksgiving holiday.

Destination plays a role in the price of your airfare. Take Orlando, Fla. -- a popular vacation spot. The data reveals February and April as the two most expensive months to fly while November and January seem to be the cheapest. In other words, you can expect to pay higher rates during peak vacation times (like spring break), but January and November seem to be good times to find cheap airfare. Warm destinations like Cancun are popular in December when it's cold, so flying during the off-season is going to be cheaper.

Data like this is useful, but it doesn't give you the whole story. You also need to know how to find cheap airfare. Be as flexible as you can when you look to book a ticket. If you're set on flying on a certain type of plane or with a specific airline, you severely limit your options.

Discount airlines are a great place to find cheap airfare. You may miss out on some of the amenities you'd find on a more expensive airline, but if you're willing to fly on an airline like JetBlue Airways or AirTran, you may be able to save some serious money. These types of airlines constantly offer low rates, sometimes even close to the departure date.

The day you fly can also make a difference. JetBlue, for instance, has in the past offered round trip flights from Boston to Los Angeles for as little as $238 [source: Koenig]. But blackout dates -- dates which the deals are not offered -- come into play. Holidays and the days immediately preceding and following them are often blacked out. In addition, for some deals, you must be willing to fly on Tuesdays and Wednesdays, which are typically less busy for airlines.

Now that you have a pretty good idea of when to look for airfare, why not take it one step further by shopping around for airports? This may help you save money. But as you'll see in the next section, it could end up costing you more, if you're not careful.

Another way to save money on airfare is to leave from a less-expensive airport within driving distance. Of course, this only applies to people with more than one point of departure to choose from. Larger cities such as Chicago, New York, Boston and Washington, D.C., to name just a few, have more than one airport close by. If you do consider going to a different airport in your region, don't forget to consider other factors like time and transportation costs such as fuel.

Let's say you live 20 miles (32.2 kilometers) from Atlanta and 125 miles (201.2 kilometers) from Birmingham, Ala. You're looking to book a flight to London and have two options. One, you can fly out of Hartsfield-Jackson Atlanta International Airport for $1,500, or you can catch a flight out of Birmingham-Shuttlesworth International, with a layover in Paris for six hours for just $1,350.

It might seem like an easy choice to drive 125 miles and save $150. An economist wouldn't just look at the bottom line, though. Economists attach a monetary value to time. You need to factor in drive time (two hours), cost of fuel ($50) as well as the six hours of time you'll spend in the airport in Paris. These are opportunity costs. In other words, what else could you have done with that eight hours (six in Paris, two on Interstate 20 between Atlanta and Birmingham)? If you were a landscaper, could you have perhaps mowed a couple of lawns and made $150? If you were a salesperson, could you have called on three new customers that led to a $500 commission? When you spend time, you lose time. How you manage that time can be more valuable than you might have ever thought.

Usually, flights with extended layovers will be less expensive. Also late night flights known as redeyes are often cheaper. Again though, if you decide to book one of these flights, you must take into consideration the value of your time. If you're content with the additional time and don't place any monetary value on it, these types of flights may appeal to you. Everyone has different priorities.

The best approach to finding the lowest airfare is doing your research and spending time searching for a good fare. The deeper you dig, the cheaper flights you'll find. We hope that with this trend information you'll have a better idea of when to plan your vacation. Just remember to be flexible and look at the big picture before purchasing your airfare. And be ready for flight cancelations too -- you may be bumped and forced to fly standby if a plane is completely full. These are all hassles, but part of flying cheap.

If you're ready to learn more about travel, book a trip to the next page and take a look at other related articles.

How Carnival Works
10 Unforgettable Street Food Destinations
How can I get a table at a top restaurant?