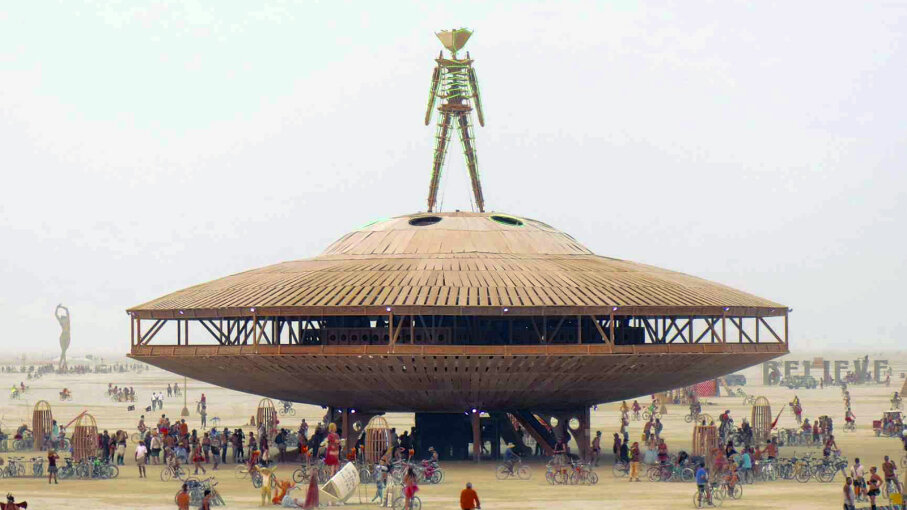 At the end of the week, the Man (seen here) goes up in flames, but for many Burners, the social experiment continues year-round. Wikimedia Commons/(CC BY-ND 2.0)

Each summer, in the Black Rock Desert of Nevada, a city is born. And each year, about a week later, it disappears.

Black Rock City first appeared in 1991, the site of Burning Man, a weeklong festival attended by tens of thousands of people. Some of those thousands are dedicated followers to the social movement the festival has come to signify. Others are curious first-timers, testing their limits. Most, though, are just "regular" folks with "regular" jobs and "regular" lives who, for a week out of the year, escape all that and plunge into an entirely different world, where money is nothing, art is everywhere and absolutely everyone is welcome.

It's one of Burning Man's 10 principles: radical inclusion. Founded mainly by Larry Harvey (performance artist? activist? social designer?) in 1986, the festival started in California's Bay Area, when a bunch of friends built an 8-foot-tall (2.4-meter) man out of wood and set it burning on Baker Beach. Others were drawn to the flames. Burning Man began.

To call Burning Man a party would be misleading. Yes, the party runs 24/7 for a week. But for the movement's followers, those who get involved in running the festival, what it is, and has been from the start, is a social experiment.

Some Burners celebrate life's milestones -- like marriage -- at the festival.
© Josh Edelson/ZUMA Press/Corbis

What began in 1986 as artful effigy among friends is now an annual escape from modern times for thousands of people. Black Rock City's population is that of a small town -- a small town where self-expression is a way of life, and physical "things" cost nothing. Except for ice. That runs a few bucks a bag.

Four years after that first fire, Burning Man's attendance had grown to 800, and the Man had grown to 40 feet (12 meters) [source: Burning Man]. That year, San Francisco authorities decided they weren't thrilled about such a huge fire on Baker Beach, so 1990's burning of the Man was moved about 350 miles (560 kilometers) northeast, to Black Rock Desert, which became the sole location for the festival the following year [source: Burning Man].

In 2012, 50,000 people descended on Black Rock Desert to live, for about a week, in a place that looks and feels very little like any other 21-century city. The week ends with the burning of a man the size of a small building. And while that symbolic culmination is the definitely main event, a kind of spiritual catharsis for many "Burners," the gathering is intended to be more than an effigy.

It is, for many who attend and certainly for founder Larry Harvey, a lifestyle choice. Ideally, that lifestyle at the very least trickles, but preferably thunders, into the other 51 weeks of the year, transforming "regular" life into something considered more meaningful than consumerism and ladder-climbing. Ideally, what happens in Black Rock City doesn't stay in Black Rock City at all.

And the city itself is something to behold -- proof, to many, that the Burning Man lifestyle can work in a very real way.

It springs up and then disappears like a mirage -- at least for those who only stay the week. For the volunteers who build, run and finally remove any trace of it, Black Rock is a study in city planning for the common good.

Black Rock City isn't a camp site. It's a designed, 940-acre temporary town with tens of thousands of inhabitants, all of whom arrive to find planned neighborhoods in which to build their temporary homes; an ice store to stock their temporary freezers; a café in which to meet; information, recycling, volunteering, medical and emergency stations; computerized message boards; shuttles to town for phone access and forgotten supplies; and a temple -- all arranged around the Man, where everyone can see him from everywhere in the city [source: Pisillo].

The city has laws, if only a few. Cars cannot drive on the inhabited groundsof the playa, a desert basin, unless authorized by the city, because Burning Man is a crowded event; and there can be no fires directly on the ground, which would leave burn scars and defy one of the festival's core principles: Leave No Trace.

There are 10 such principles, made official by Larry Harvey in 2004 [source: Burning Man]. They set the stage for the experimental society that is Burning Man, a festival that can feel something like a very long, unrehearsed piece of performance art ...

On the playa, almost anything goes. Self-expression, in any form that doesn't go against the festival's 10 principles (see sidebar), is a good unto itself and may include creation or destruction, drugs, sex or nudity, improvised or lovingly planned performance, or large-scale sculpture hauled hundreds or thousands of miles on a truck bed. People build such things for the occasion alone.

The 10 principles impose few limits. They're a lot about removing limits, in fact -- removing limits and encouraging responsibility -- for one's world, one's neighbors and oneself.

Theme camps, art, gifts and activities might spring from the year's theme, like 2009's "Evolution" or 1999's "The Wheel of Time." Burners themselves provide concerts, theatre, bars, art exhibitions and group meals. There are guided spiritual journeys, drum circles, weddings, funerals and sex clubs on the playa.

In the spirit of radical self-expression, some of Burning Man is R- or X-rated. Most of it, however, is not, and many families do attend the festival. Theme camps, for their part, will often post signs if they are not child-appropriate. Ultimately, though, Burning Man may not be the place for those easily offended or shocked. Burners who bring their kids should be OK with their children possibly seeing some adult (or just very, very odd) sights.

Thinking of joining in? A few practical issues to consider before hitting the Burning Man playa ...

Everyone is welcome at Black Rock City, but "radical inclusion" isn't free. The not-for-profit Burning Man festival does charge for its experience, and in 2011, the festival sold out for the first time [source: Jones].

Tickets may be available "at the door," but they're first-come first-served, so it's a risk. Party-goers may also sell extra tickets at the event, and they may be cheaper than face value, but counting on that is a risk as well. Those who go that route may be driving hours into the remote Nevada desert only to be turned away.

In 2013, low-income tickets ran $190, and standard ones $380. Early buyers pay much more -- $650 in 2012 [source: Burning Man]. Ticket sales start in December with the more-expensive early sale and continue until will call closes.

A few other things to know before you go:

Finally, and perhaps most important (except for the water -- that's more important), is the Burning Man commandment: Know thy ability to adapt. First-timers should put some thought into which Burning Man experience is right for him or her. And be realistic. The festival is not for the meek, and one week may be a bit much for an introduction. Some discomfort is normal and to be expected -- it may even be good. But starting small (staying just a few days is fine) can help make the festival experience a positive one for those who aren't entirely sure they're the Burner type. Whatever that is.

Radical self-expression can take some practice. The city will spring up again next summer.

Burners are active outside the Nevada desert. There are groups all over the country (and beyond) that organize gatherings throughout the year. Information on year-round activities in your area is available at the Burning Man Web site.

It can be difficult to approach a subject objectively when you have prior information, and I know some Burners. The ones I know are dedicated to the festival and the experiment. They bring art. They create theme camps. They tell stories of the beauty that is Burning Man.

I was reminded, however, on sharing my research discoveries with my husband, that our friends' devotion to the social experiment may have been held by almost all Burners in the festival's early days, but as with all things revolutionary, time and hype can dilute. I focused here on the ideal that is Burning Man, and it's important to note that with an attendance that has grown to 50,000 people, some of them are going to care not at all about such things as Radical Self-reliance and Community Service. For some on the playa, it's just about sex and drugs -- something to be aware of lest disillusionment set in on day one.